The Wrong End Of The Telescope: Reasons For Hope On World Press Freedom Day 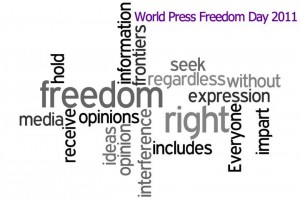 World Press Freedom Day is May 3rd, a time when editorial writers will rightly mourn the decline of freedom of expression and the alarming rise in the number of journalists and bloggers killed or incarcerated around the world. According to the Committee to Protect Journalists, 79 journalists were killed in 2010 and hundreds of professional and citizen journalists remain behind bars. These are undeniable tragedies, most especially for the journalists and the families of those who were killed, tortured or jailed for trying to report the news, a right enshrined in the Universal Declaration of Human Rights. But the much-cited freedom of expression indices are misleading. The real story on press freedom is that our side is winning. The genie is out of the bottle and authoritarian regimes everywhere are fighting a losing, rearguard action to maintain control over their information space.

They might as well be trying to grasp water with their fists. The reason there is a dramatic decline in press freedom statistics is that authoritarian governments feel threatened as never before by the revolution in information and communications technologies that is sweeping the world
and they are trying desperately to contain it. Even in countries as closed as North Korea information seeps in by satellite, the Internet, smuggled DVD’s and flash drives. Indeed, worn as a necklace, thumb drives have become a status symbol in Pyongyang.

Nor can authoritarian governments keep their own news in. When someone in the town of Bouazzi, Tunisia used a cell phone camera to record a small demonstration following the self-immolation of a local fruit vendor, the video went viral on Facebook and then was broadcast by satellite on Al Jazeera, setting off a firestorm of revolt throughout the Arab world that is still burning today. Information simply has no respect for national boundaries.

Even before Eric Hoenecker tried unsuccessfully to remove satellite dishes from the rooftops of East Berlin, strongmen the world over have tried to repress their citizens’ access to information. The “Color Revolutions” that swept through Ukraine and other CIS states were fueled by independent media as were the revolutions that toppled General Pervez Musharraf in Pakistan
and President Slobodan Milosevic in Serbia. No wonder authoritarian regimes are trying their best to stifle the free press.

A leader of one of America’s prestigious foundations asked me recently, “Why, if so much money has been invested into media development, does the level of press freedom keep going down?” “Because we are looking through the wrong end of the telescope,” I responded The freedom of expression movement is right to protest the many abuses of press freedom in countries like
China. But it’s important to recognize the unprecedented advance Chinese citizens have made in gaining access to information. China slid to the No. 181 spot on press freedom rankings in 2010, compared to 177th place in 2005.

But China now has over 100 million bloggers and almost half a billion people are online–an unimaginable leap forward from its recent past. These facts are not an apology for China’s very real repression, but we must recognize that the overall growth of information wealth in China represents more of an information revolution than a dungeon of information darkness.

A side-by side comparison of Freedom House’s annual Freedom of the Press Survey with official figures for the top 20 recipients of US democracy and governance assistance shows almost half of them have regressed compared to five years ago. In other words, it would appear that press freedoms are worsening in the majority of countries where we spend the most to build democracies. But to really understand the level of information wealth or poverty, we may need to measure other things.

For example, Afghanistan slid from 145th place five years ago to 165th in 2010. But the actual information ecology in Afghanistan is incomparably better than it was in its history. With hundreds of independent radio stations, dozens of television channels and almost half its population with
cell phones, Afghanistan has gone from the dark ages to a level of information that was unimaginable just a few short years ago. Neighboring Pakistan went from 126th to 134th in five years, yet it has one of the most vibrant, pluralistic media scenes in Central Asia.

Yes, attacks on journalists are rising as authoritarian regimes feel increasingly threatened by the spread of communication technologies. But while we pause to honor the heroism of journalists and citizen journalists this World Press Freedom Day, let us also remember that their sacrifices
have not gone in vain.

David Hoffman was a founder of and serves as Chairman Emeritus of the Global Forum for Media Development, a cross-sector initiative of more than 500 leading media assistance organizations from over 100 countries. GFMD works to develop and strengthen independent media around the world that are both responsive to, and reflective of, the needs of ordinary people.

Hoffman has written widely about media and democracy, the Internet, and the importance of supporting pluralistic, local media around the world. His articles have appeared in The New York Times, The Washington Post, The Wall Street Journal, The International Herald Tribune, Foreign Affairs, and The San Francisco Chronicle. He has also testified before US House and Senate committees on issues of press freedom and access to information.

Hoffman was project director of the Emmy-award winning television series “Capital to Capital” in 1987-1990, produced in association with ABC News and Soviet State Television.

From 1980-1982 Hoffman was the editor of Evolutionary Blues, a journal of political thought on international conflict, the threat of nuclear war, and US-Soviet relations. Hoffman has a BA in Political Science from Johns Hopkins University and has completed doctoral work at the University of Colorado in the Social and Intellectual History of the United States.

Chinafreedom of the press
Tips