‘There’s Not Been Any Contact’: Trump Transition Team Hasn’t Reached Out To Pentagon

‘There’s Not Been Any Contact’: Trump Transition Team Hasn’t Reached Out To Pentagon 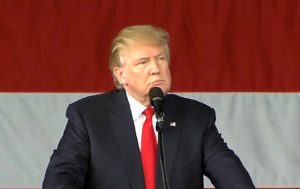 A week after winning the presidential election, it appears that Donald Trump and his transition team are dealing with some bumps in the road. From reports that Trump wasn’t aware of the scope of the office to outrage over the selection of Steve Bannon as chief strategist to stories about infighting within the transition team itself, things have seemingly not gone too smoothly for Team Trump.

With all that going on, it looks like the transition team may have forgotten something. According to the Washington Examiner, officials at the Pentagon say they have yet to hear from Trump’s folks.

Currently, Defense Secretary Ash Carter is traveling and not in Washington. However, he did inform his chief of staff to stay put to assist Trump’s team with anything they need.

Yet, nobody has come by.

Carter said Monday he’s not worried about the no-shows.

“I don’t know when they’ll come. That’s entirely up to them,” Carter said. “They’ll arrive when they’re ready to arrive. But we’ll be ready for them when they do.”

Carter also stated that the Department of Defense is very good at changing of commands and that they’ll be able to assist the transition team with anything they’ll need when they do call.