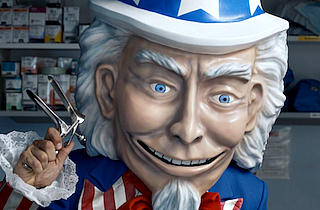 The advertising war over Obamacare just got creepy.

Generation Opportunity, a Koch Foundation-funded anti-Obamacare group, plans a $750,000 campaign of “Opt Out” ads aimed at convincing college students to forego the Affordable Care Act’s exchanges. (Included: “brand ambassadors” who will distribute Opt Out beer koozies at college football games.) But if their first two ads are any indication, the group’s strategy appears to be to freak the living daylights out of everybody, student or not, within viewing distance of a television.

In the first ad, “The Exam: Creepy Uncle Sam”—yes, creepy is the organization’s word—a young woman goes to her OB/GYN for an exam only to have her doctor replaced by a terrifying oversized Uncle Sam, who emerges between the woman’s legs over the sound of discordant circus music. “Don’t let government play doctor,” warns the text:

Another video features a man told to pull down his pants and lay on an operating table, at which point Creepy Uncle Sam springs up from behind him and slaps on a surgical glove. You can take it from there:

For all the horror movie theatrics, “GenOpp,” as the group probably hopes the kidz will call it, says its message is financial: “What we’re trying to communicate is, ‘No, you’re actually not required to buy health insurance,’” President Evan Feinberg explained to Yahoo! News. “You might have to pay a fine, but that’s going to be cheaper for you and better for you.”

No. If “choose fine not exchange!” really is GenOpp’s message, the ads are not only creepy but also a bait and switch, relying more on circa-2009 fears about the government takeover of medical decisions than on any rational financial argument that paying the fine is wiser than signing up for exchanges. These ads make no mention of exchanges, fines, or anything else; in fact, they provide no rebuttal to the Affordable Care Act at all, substantive or otherwise. They just have a dude in a scary mask about to violate a woman. So much for what Feinberg is “trying to communicate.”

If conservative groups feel they have a valid financial argument against Obamacare, then they should make it. But if “straight-to-video slasher flick meets tea party iconography” is the best vehicle for your message, it says a lot about the message itself.