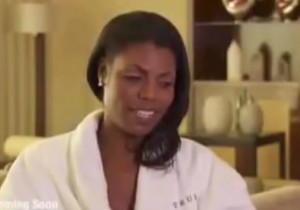 We all know that Donald Trump wanted to pit Black people against White people on The Apprentice, but did you know he succeeded in setting rich people against poor people for the hand of one of his most prominent Apprentice contestants, Omarosa?

While The Apprentice is the show that brought Trump into the public eye, The Daily Beast is surfacing Trump’s short-lived TV One show The Ultimate Merger. The show was a cross between The Bachelorette and depressing Bush-era reality prank Joe Millionaire, and the first season was all about having 12 men fight it out for Omarosa Manigault, who currently serves as Trump’s African-American Outreach Director.

The Daily Beast looked at an application from the show, which showed contestants had to answer several questions about themselves, including how much money they make and their thoughts about Trump. Six contestants were rich, six were poor, and only Trump was the only one who knew who was who. Here’s a promotional video for the show:

During a promotional interview with NBC, Trump said that “hated [Manigault] from the beginning” of The Apprentice, but kept her around because it drove up the ratings. Former Apprentice staffers on the show have said similar things about Trump in the past in terms of how the show was produced at times with more concern for telling an interesting story than in hosting a job interview.

Omarosa, however, was considerably more loyal to Trump, as in this promotional interview on Howard Stern‘s show, in which she showed a protective streak when Stern speculated that Trump might have been more than a little “hands on” with the contestants:

Stern: “Did you squeeze their penis during the taping of the show or did Trump check to see how big they were?”

Manigault: “Don’t talk about my mentor.”

There was no “winner” in season one because the last remaining contestant was disqualified for still being married at the time, though separated. The Ultimate Merger lasted two seasons.