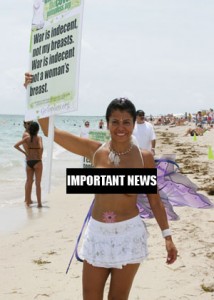 How to make a perfect summer news story: Step 1- Have a bunch of women walk around topless as a way to protest the hypocrisy that guys can bare their chests but ladies can’t. Step 2- Have those same women all be from a religion that believes that humans were created by alien scientists. Step 3- Cross at least two selections off your “Words I Want to Use In a Headline Someday” wish list.

The organizers of Go Topless 2010 wants the law books to specifically promise “constitutional equality between men and women on being topless in public.” To let their cause be known, they have planned protests in nine American cities over this summer. At these protests, all of the women will go almost topless (they wear fake nipple stickers over their actual ones to protect themselves from the laws they’re trying to overturn) while the men all wear bras and bikini tops.

Now, here’s where the story gets awesome. Well, awesomer. From AOL News:

“Although Go Topless is focused on the laws in the U.S., its roots are, well, extraterrestrial in origin.

Both Gary and Abdulla are members of the Raelian religion, which believes that humans were created by advanced scientists known as the Elohim. The group is best known for its close ties to Clonaid, a human cloning company that claimed in 2002 to have created the first cloned human baby.

They say their beliefs in ETs are inspiring them to fight to make the right to bare breasts as fundamental as the right to bear arms.

‘All life on Earth is created by advanced scientists,” Abdulla said. “We have no reason to be shy about our bodies. They are works of art.'”

Before you go comparing them to that other big extraterrestrial religion, Scientology, the Raelians would like to point out that they are different in many ways, including the fact that they don’t charge followers to learn their beliefs. If they really wanted to make the distinction though, they should just point out that Scientologists rarely have topless protests. Raelians for the win.

Now, while I support the Raelians in the freedom to practice their super-intelligent design religion (learn more here) as well as their fight against America’s close-minded puritanism when it comes to sex, there’s one problem with this protest I’d like to point out. Does anyone else think it’s a little insensitive of the Raelians to hold their Go Topless day in Miami Beach, just blocks away from the Great Wet T-Shirt Tragedy of 1984? I mean, I have nothing against the Raelians. This isn’t prejudice at all. It’s just a matter of sensitivity.

Read more about the protest at AOL News and watch the video below. Warning, it does contain semi-NSFW fake areolae on top of real breasts. (via Reddit):