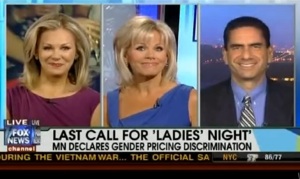 The Minnesota State department of Human Rights has decided to ban “Ladies Night” — the bar promotion that provides free or discounted drinks for female bar patrons — because it is, in their purview, gender discrimination. Should a private business be allowed to offer discounts to attract a certain clientele? This was was the remarkably absurd (and “fair and balanced”) debate between Fox New’s legal analyst Lis Wiehl and self-proclaimed “anti-feminist” Marc Rudov. If the story couldn’t be weirder, check the sudden and severe vitriol that evolves between the two panelists.

Somehow the discussion – which is led by host Gretchen Carlson – starts on the subject of free and/or discounted drinks for women, quickly goes to the perils of insurance companies covering Viagra over birth-control, and the stunningly leads to the very odd accusation made by Rudov that dating is akin to prostitution?

Watch the clip for yourself (a rough transcript follows the video below.)

Wiehl: The human rights board of Minnesota is wasting their time on ladies night? Why don’t they go and check out hairdressers that charge women three times as much to get their haircut or dry cleaners that charge women twice and three times as much for blouses as they do a man for a shirt. Come on the insurance companies pay for Viagra but not birth control and yet we’re still only being paid $0.77 on the dollar. if we get a little bit of a luxury of a night, the girls night out where we don’t spend quite as much, come on!

Carlson: how do you argue with those points?

Rudov: Well, you can’t argue with those points because they’re totally fallacious so let’s stick with the facts. Minnesota has declared ladies nights a violation of human rights. But because they’re violating men, they’re not going to really enforce it unless men complain. This is the same state that allows convicted convicts to illegally vote for Al Franken. The fact of the matter is ladies night is just another female entitlement and women aren’t going to show up at the bar unless they get free drinks.

Carlson: let me ask you this. let’s say —

Rudov: The state doesn’t care about enforcing the laws.

Carlson: let’s say — yes, they do. come on. the state — let’s say that the — i go to ladies night and get a lot of women who come to the bar, do men like that or do they not?

Rudov: Well, what you’re just doing is reinforcing the point that I’ve always made is that dating is legal prostitution. if women aren’t going to show up unless they’re bought and paid for, that’s prostitution.

first of all, get a life. ok? come on. this is ridiculous. if the free drink so much, put a wig on and go to the bar, all right? Gretchen is absolutely right. bar owners do it for a very smart reason witch is that more women at leads night — girls going out with girls having a good time together. not to catch men. guys will like going in there and buying the ladies —

Rudov: Why don’t have Episcopalian night, too? they also have free drinks and —

Wiehl: They probably do!