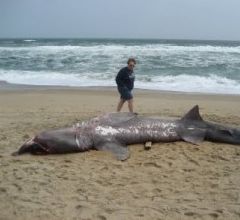 How about this for a story? At the famous Egyptian resort Sarm El Sheikh, a shark has been terrorizing the guests. So far, it had injured four and killed one. However, its tourist munching days are over as Dragan Stevic, a Serbian man, managed to kill it. He is now a hero. The amazing part? He killed the shark accidentally by basically falling on it while drunk. He doesn’t even remember doing it. (UPDATED AT BOTTOM)

The whole thing is too amazing for words but I’ll let the Macedonian International News Agency do their best at explaining it:

“Milovan Ubirapa, one of Stevic’s friend who witnessed the incident explained that Dragan had decided to go to the beach for a swim after a long night of drinking. As Dragan and his friends approached the beach, he saw a fairly high positioned jumping board utilized earlier in the day by divers.

‘Dragan climbed on the jumping board, told me to hold his beer and simply ran to jump. There was no time for me to react or to try to stop him, he just went for it’ says Milovan.
‘Dragan jumped high and plunged down to the sea, but didn’t make as much splash as we thought he would’, explained Milovan.

The reason could be because Dragan Stevic ended up jumping straight on the shark which was lurking near the beach, probably looking for its next victim. Dragan had nailed it right in the head, killing it instantly. The Egyptian police found the shark washed out on the beach that morning.”

Stevic was so drunk, he doesn’t remember anything. In fact, he didn’t even realize what he was doing at the time. When he swam back to shore, he complained to his friends that he had twisted his ankle because the water “wasn’t soft.” Nice.

Now he’s an international hero. The Egyptian media have dubbed him “Shark El Sheikh” and he’s been credited with saving the tourist season. Surely there’ll be a lot of partying in order. Of course, that will have to come later. Right now he’s in the hospital. You know, for alcohol poisoning.

UPDATE: Well, I may have jumped the shark on this one. Gawker’s Adrian Chen pointed me to this article which claims the above shark picture as its own. I knew this story was too good to be true.

Of course, the fact that the picture isn’t what it was purported to be doesn’t necessarily make the story false. However, since the earliest article I could find about the incident, the one I quoted above, claimed the photo was the real deal, I think it’s safe to say that Dragan Stevic didn’t kill any Egyptian shark.

Obviously the true story is that he got drunk, jumped off the diving board, and killed Morgan Freeman.