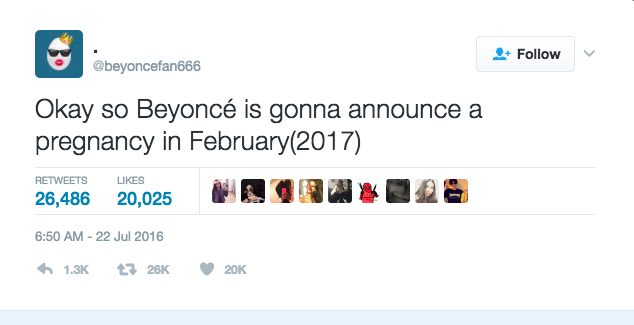 Full disclosure: We’re not sure what’s going on here, and we’re pretty skeptical about it. But, there is a Twitter account called @beyoncefan666, and whoever is behind it is right about everything, including Brexit, Lady Gaga‘s album release, Donald Trump‘s win, and a few things about Beyoncé.

You’ve almost certainly heard the news, but in case you haven’t, Queen Bey and Jay Z are expecting twins. When Beyoncé posted the news to her Instagram account, the Internet lost its collective mind- except, probably, for @beyoncefan666, because he or she seems to have already known. Here’s a Tweet that is dated July, 2016.

Okay so Beyoncé is gonna announce a pregnancy in February(2017)

And here’s one from a few days ago:

Beyoncé is pregnant. She told me.

It wasn’t just Beyoncé’s pregnancy, though. The account also Tweeted, in advance, about Brexit:

U.K. Voted to leave the Eu

Haha referendum coming up. Just a heads up: we leave the EU lol

In the referendum 52% vote leave

Is yall ready for trump to become president :(((

The account also Tweeted about Lady Gaga’s album and the fact that she’ll be playing at the Super Bowl halftime show this Sunday:

The Twitter user says he or she is an intern at Parkwood, Beyoncés company, but that does not explain it. Maybe he or she really is a “low key psychic.”

being a parkwood intern and low key psychic is lit

We are amazed. Buzzfeed, however, points out that other than actually being psychic or being able to hack a Twitter account, there could be something much simpler at play. If you Tweet out lots of predictions of things that might happen from a private Twitter account, like Trump becoming pregnant or one of the biggest stars on the planet performing at the Super Bowl, you can just delete all of the incorrect predictions, make the account public, and it looks like you’re some sort of wizard.

Whatever is going on- the whole thing is pretty funny.