This Time, It’s Personal: DOJ vs. Rosen Another Ugly Chapter Of Obama vs. Fox
video

This Time, It’s Personal: DOJ vs. Rosen Another Ugly Chapter Of Obama vs. Fox 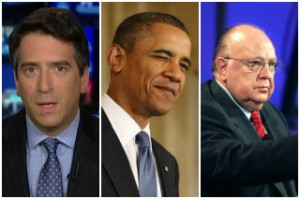 The Department of Justice seizing two months of phone records from approximately 100 reporters at the Associated Press has been roundly branded as “chilling” by those who live inside the media bubble.

But to average folks not paying close attention due to long hours at the office, taking care of family matters, or just apathy about anything political these days, the story didn’t have the impact some thought it might have. Perhaps it’s scandal fatigue (so many scandals, so little time), or maybe it’s because the AP is a humdrum entity: no cable television network, no prominent reporters making the rounds on political news shows…no pizazz to draw attention. AP is simply a news-gathering business. And a faceless one at that…

As expected, the AP phone records seizure was discussed during my visit to CNN’s Reliable Sources on Sunday. But after Howard Kurtz, Jane Hall and I had discussed the crux of the story and its impact on reporters and sources at length, a thought hit me leaving the studio:

What if the DOJ had seized phone records of a more known, more prominent news organization?

What if they went after, say, Fox News instead of the AP?

After all, President Obama doesn’t exactly have FNC marked as a favorite in his remote control. Never has. He’s the first President to openly attack a cable news network for its content and tone. Mr. Obama talks about the network hurting dialogue inside the Beltway, even being one of the reasons gridlock exists. The unintentional comedy is this: The President makes these kinds of complaints when doing interviews with the New Republic, which happens to now be owned by a former senior member (Chris Hughes) of his campaign staff. Talking about bias to a biased outfit is no way to make a solid point…

So when the big news broke courtesy of a Washington Post report that the DOJ tracked the comings and goings of Fox reporter James Rosen—along with seizing his phone records and emails—it was shocking yet completely not surprising when considering the history here. Consequently, Justice is accusing Rosen–Fox’s Chief Washington Correspondent–of somehow being a criminal. Included in his “crimes” are the following, according to FBI agent Reginald Reyes:

“From the beginning of their relationship, the Reporter asked, solicited and encouraged Mr. Kim to disclose sensitive United States internal documents and intelligence information about the Foreign Country (Note: Stephen Kim is a naturalized citizen originally from South Korea. Back in 2009, he was indicted for allegedly telling Rosen that U.S. intelligence thought North Korea would respond to more UN sanctions with additional nuclear tests, a story Rosen proceeded to report on Fox News). The Reporter did so by employing flattery and playing to Mr. Kim’s vanity and ego. Much like an intelligence officer would run a clandestine intelligence source, the Reporter instructed Mr. Kim on a covert communications plan.”

In other words, Rosen did nothing outside the bounds of what good reporters do…but may have gone overboard when deploying the whole vanity and ego strategy. Sources are still checking on that aspect of the case.

As a result, we now we have a face, a network—and a known thorn-in-the-side of the President—in the crosshairs of an administration that is currently enduring the worst month of any administration since the 1970s.

A little more irony: When the AP story broke and the President subsequently addressed it after coming under fire from almost all news organizations and civil libertarian unions, he spoke of reviving legislation around a proposed Media Shield bill. Senator Charles Schumer (D-N.Y), a sponsor, says the legislation reflects many state laws which say state reporters don’t need to disclose the names of confidential sources or their means of interacting with them.

The President’s olive branch to the press harkens back to a time when organized crime used to take “collections” from neighborhood businesses…all in the name of protection from potential criminals and property damage. And if the owner of the business refused, theft and damage would commence from the same people who offered protection in the first place. Quite a racket…

Same deal with the Obama Administration: “Sure, we seized 60 days of phone records of 100 reporters in the name of national security (which is comical considering the size of the dragnet…which only shows the DOJ had no idea what it was looking for by not being more specific), and yes, we may have tracked the whereabouts of all times of a pesky Fox reporter, but we’ll make it all better by creating a law that protects reporters and sources from, well…people like us.

But for now, people outside the bubble don’t seem to care much if unchanging polls (49 percent approval rating for the President) are any indication. Half the country may be at odds with the President, but even more loathe the media. For some, it’s like trying to decide to root for either Bernie Madoff or Baghdad Bob in an arm-wrestling match.

But let’s make it official: Trust has become a four-letter word starting with “s” and ending with a “t”.

Trust in government, trust in media.

Hopeless polarization on both fronts can do that.

So while this all plays out—and it will for a long, long time—enjoy the show.

Because when Fox is the face of a scandal like this, two things will rise: