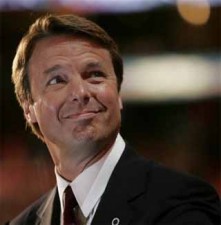 When John Edwards finally admitted paternity of his daughter by mistress Rielle Hunter — in the wake of not one, but two damning books — many disappointed Democrats breathed a sigh of relief that the man’s career was dead and gone. Time, on the other hand, started crafting an article about Edwards’ comeback entitled “Rehabilitating John Edwards: Difficult but not Impossible.”

“There’s unpopular, there’s widely loathed, there’s despised, and then there’s John Edwards,” the piece begins, truth enough. And then the set-up: “Short of curing his wife’s cancer, is there anything he could do to get people to at least tolerate him?”

Image consultants and PR managers, who are professionally optimistic, say it’s possible for him to rehabilitate his public image, but not easy. First up, he has to come totally clean and he has to do so in front of a camera. On Jan. 21, just shy of Quinn Hunter’s second birthday, Edwards issued a statement that finally copped to him being her father. “It was wrong for me ever to deny she was my daughter and hopefully one day, when she understands, she will forgive me,” the press release said. Nuh-uh. For a doozy like that, you have to front up personally, say the experts. “I can’t emphasize enough — the tone of voice is the most important element,” says Mike Sitrick of the PR firm Sitrick and Company. “This is an art, not a science.”

If it’s art, Edwards is going to have to become Picasso, all of a sudden.

The article, far from convincing, even concedes that it’s nigh impossible for Edwards to ever be elected again — or even appointed — but insists he can still be “forgiven.” And yet, if you’re a politician and your life goal, bordering on obsession, is becoming President of the United States, then what’s forgiveness without getting elected? For the sort of egomaniac Edwards has been made out to be, to “claw his way back to being ignored” might be worse than being loathed nationwide.