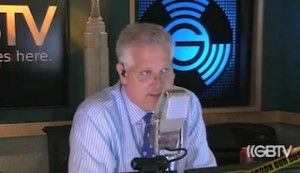 Human existence is plagued by tragedy and, as such, one of the biggest questions we’re constantly faced with is the immortal query “How soon is too soon?” When is it too soon to tell that edgy joke? When is it too soon to make money off Amy Winehouse? And when is it too soon to voice your misgivings about the nature of the youth camp that was the place of the horrific terrorist shootings in Norway? For that last example, many would say that a few days later is too soon. This is especially true if, like Glenn Beck did this morning, you’re phrasing your misgivings by comparing the camp to the “Hitler Youth.”

Here’s the quote in question which Beck made on his radio show this morning:

“As the thing started to unfold and there was a shooting at a political camp, which sounds a little like the Hitler Youth. Who does a camp for kids that’s all about politics? Disturbing.”

Ironically, a few seconds later, Beck was discussing how the attack correlated to a monologue he’d done on his show a few years ago and one mistake he’d made then had overtaken the focus from the rest of what he said. I’m going to take a wild guess that that same thing’s going to happen here.

While Beck’s Hitler Youth comment is shocking (sure, he’s never been a fan of left-wing groups “indoctrinating” children but, come on, a bunch of teenagers were just murdered), his other comments were just as interesting. Just like John Bolton and the friends of Fox & Friends, Beck made his case for why we can’t consider terrorist Anders Behring Breivik “right-wing.”

Here’s Beck discussing that old monologue and how he compared European and American politics with metaphorical train tracks:

“This was one of the episodes where I showed the railroad tracks that were different than America. In America, the Left railroad track is gigantic government – it could be Communist or Fascist, it doesn’t matter, it’s giant government. The other side of the track is anarchy or very, very small government. So that’s the Left and Right here in America. The Left and Right in Europe, because, once they got rid of the kings, they didn’t get ‘We the People,’ they had to replace it with another strong government. And that’s where Fascism and Communism came from. That’s your Left and Right. Fascism on the Right; Nazis. And Communism on the Left. And there are variations on both of those theories, Fascism and Communism, Left and Right. This guy, the shooter, is from the right-wing, different than our right-wing. It is still big government.”

So you see, whenever you hear people saying Breivik is “right-wing,” just remember that he’s actually just a big government guy. Like, I don’t know, who’s for big government…who is Breivik more like in America…what’s the implication here?

Too soon. Whenever a tragedy happens, someone will try to profit from it instantly. We no longer just have terrorists. If they’re not Muslims, we see both political parties instantly try to push the guy onto the “other team.” It happened after our shooting in Arizona and now it’s happening with a shooting and bombing half a world away.