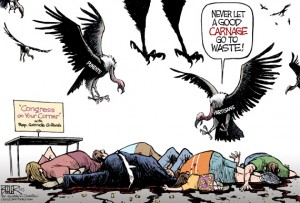 Last night on The Daily Show, Jon Stewart chose to avoid humor almost entirely in his discussion of the tragedy in Arizona. Meanwhile, Nate Beeler, editorial cartoonist for the Washington Examiner plied his trade as usual and, in doing so, created a striking cartoon that certainly gets his point across. However, by actually depicting the bodies of the victims, piled in a heap and covered in blood, Beeler’s cartoon will inevitably start a discussion about humor in the wake of tragedy and the very nature of “too soon.”

First off, it’s important to note that, although I use the word “humor,” the cartoon is not funny and was definitely not intended to be. It features a group of bloody victims on the ground, lying next to a sign for Rep. Gabrielle Giffords’ “Congress on Your Corner Event” (as if we wouldn’t get it) and being circled by vultures labeled “Partisans.” The clear message is that people exploited the tragedy for their own political gain. Nothing that hasn’t been said already, however, a co-worker forwarded the cartoon to me, describing it as “really inappropriate and in poor taste.” I disagree but I can easily see how someone would feel that way.

It’s important to remember that Beeler’s job is as “editorial cartoonist.” The key word there is “editorial.” Imagine if you picked up a newspaper today and read an op-ed that described how “partisans eagerly circled like vultures while the bodies of the victims lay on the ground, surrounded by blood.” You wouldn’t bat an eye. The grisly details, while unpleasant, are clearly being used to drive the argument home. In fact, Glenn Beck gave a similar (although less bloody) description of the bodies not yet being in the ambulance when Sheriff Clarence Dupnik began making political statements.

So why would this cartoon offend people? Well, it’s the power of visuals. They say a picture is worth a thousand words. Well, it goes the same for a drawing. Not only do we see the bodies sketched out in front of us, one of the victims, 9-year-old Christina-Taylor Green, is instantly recognizable because she is the only child (a child!). This affects people in a way that the greatest writers will spend years trying to create. That’s just the way it is. Yet, shouldn’t the fact that Beeler’s cartoon creates such a strong reaction make it a good cartoon? Isn’t he just doing his job?

Obviously, no one in this free speech-loving society believes there should be regulations on whether or not a topic is “too soon.” However, as someone who has performed on a stage, I will tell you that any comedian is aware of the line where a certain subject may make a certain audience turn on you. I’m sure Beeler was aware of this. He wasn’t wrong in drawing those bodies. He merely made a choice.

As sure as I am of that, though, I’m equally sure that many (perhaps most?) people will disagree with me and side with my co-worker, feeling that the cartoon is inappropriate. Again, while I don’t share their opinion, I certainly understand where they’re coming from. That’s why I think this is an interesting conversation to have.

So what do you think? Did this cartoon go over the line?