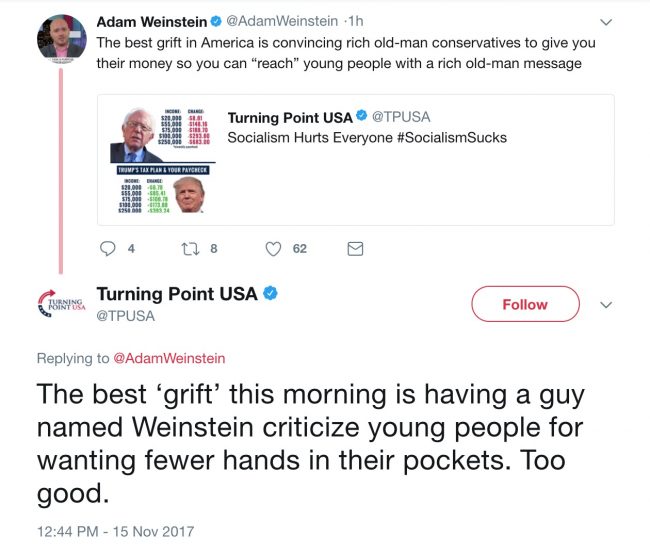 Whether it was meant as a reference to (((the Jews))) or just a bad attempt at a Harvey Weinstein joke (UPDATE BELOW ON THAT), they took it down, but not before getting dragged on Twitter:

glad to see Turning Point moved past the diaper-wearing and got back to bread-and-butter anti-Semitisn pic.twitter.com/9qW2K2dUJh

Please consider that @TPUSA's apparently anti-Semitic "joke" tweet to @AdamWeinstein could also be an (equally tasteless) "joke" about sexual assault.

I've been trying to figure out how this could maybe be a Harvey Weinstein joke… but … pretty much coming up empty there. https://t.co/KNO3lQGAPJ

Just some of that totally not anti-semitic “economic anxiety” from @TPUSA. pic.twitter.com/DWIxrnO3Oi

Slim chance this was a horribly botched, ham-fisted attempt to make a Weinstein/sexual harassment reference.

But it realllllly comes across as a straight-up anti-Semitic remark centered around a Jewish last name and money. pic.twitter.com/UMknnyv3rJ

A public apology will be fine. And not a “I didn’t mean to make the Jew-money quip, I was just riffing off the fact that you share a common surname with a noted sexual predator I hate for political reasons” kinda apology

A reply from our account had a joke made in poor taste referencing Harvey Weinstein. The incident has been deleted & handled. We apologize to anyone who read the tweet as derogatory in any other way. We hope to continue positive dialogue in the fight against big government!