Trump Advisor Alleges Obama Might Have Won N.C. in 2008 Because of Voter Fraud

Trump Advisor Alleges Obama Might Have Won N.C. in 2008 Because of Voter Fraud 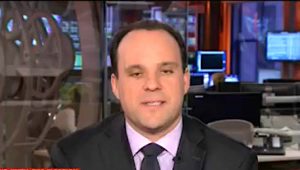 CNN’s Jake Tapper replied, “Boris, where are you getting that from? Barack Obama won in North Carolina because of voter fraud?”

Epshteyn cited a “Washington Post story that just came out a few days ago,” but apparently meant to say a two-year-old contributors’ blog post that currently appears in site’s online archives with a sweeping editorial disclaimer.

It was not immediately apparent what Post story “that came out a few days ago” Epshteyn was referring to. Though a recent item on the paper’s site includes this video from a Trump rally Monday in Green Bay, Wisconsin, making many of the same claims Epshteyn did.

In his Green Bay speech, Trump liberally quoted from a post, entitled “Could non-citizens decide the November election?” that appeared in the Washington Post‘s Monkey Cage blog in Oct. 2014. The post was unearthed Tuesday by Breitbart, and it’s more likely Epshteyn was referring to this in his segment with Tapper (although he did not return a request for clarification).

The post was authored by two contributors, Jesse Richman and David Earnest, both then-associate professors at Old Dominion University. In it they extrapolate using data from the Cooperative Congressional Election Study (CCES), showing that 5 individuals out of 32,800 total were non-citizens who were verified to have voted in 2008.

“Our best guess, based upon extrapolations from the portion of the sample with a verified vote, is that 6.4 percent of non-citizens voted in 2008,” they write, adding:

Because non-citizens tended to favor Democrats (Obama won more than 80 percent of the votes of non-citizens in the 2008 CCES sample), we find that this participation was large enough to plausibly account for Democratic victories in a few close elections.

However, this post now appears online with the following disclaimer:

Note: The post occasioned three rebuttals (here, here, and here) as well as a response from the authors. Subsequently, another peer-reviewed article argued that the findings reported in this post (and affiliated article) were biased and that the authors’ data do not provide evidence of non-citizen voting in U.S. elections. [emphasis added]

Epshteyn continued: “The Post story, they’re saying that about 5% of voting in North Carolina may have been by people who are non-citizens, who should not have been voting, and swung North Carolina to Mr. Obama, President Obama, because of how tight that race in North Carolina was.” He did not mention that the methods and results discussed in the blog post had been challenged.

“You are suggesting — stunningly — that the only reason President Obama won North Carolina in 2008 is because of corruption in the electoral process. And it’s an astounding charge that I have never heard before you said it,” Tapper said.

Epshteyn again asked Tapper to refer to the Post article, which only suggested that there was “an argument to be made,” he said.

He was not the only Trump surrogate to dredge up the report Tuesday. Trump campaign co-chair Sam Clovis suggested in an interview with Boston Herald Radio that Trump’s claim that Obama won North Carolina in 2008 because of fraud was worth discussing.