Trump and the Media: A Match Made in Heaven or Hell? 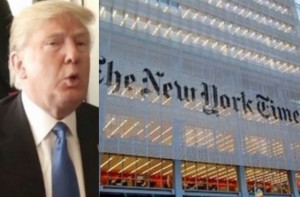 Over the past two days there has been a ton of “news” about the association between the media and President-elect Donald Trump. There was a huge poll about giving the press very poor grades for their handling of his campaign (in both directions). Yesterday, Trump met with, and apparently lectured, major television outlets in a meeting some referred to by someone there as “fucking outrageous.” Today, Trump cancelled, and then finally met with, the staff of The New York Times.

Most of the focus has been on the highly adversarial relationship between Trump and the former fourth estate of our society. After all, Trump dominated media coverage on every outlet this year, and the majority of that reporting/commentary was “negative” in nature. Trump won the GOP nomination, in large part, by running against the news media, even as they were giving him over two billion dollars in free “advertising.” He won the general election, in no small measure, because large portions of the public, understandably, no longer trust that what the news media tells them is true (bizarrely, making them far more susceptible to believing stories which are purposefully made up, as opposed to simply very biased).

Now we are told that Trump is very concerned about the press being fair to him and telling the “truth” (that’s rich!). He’s also apparently extremely troubled about NBC using a photo of him with an unsightly chin line, which is just completely wrong for the state-run media to use for an incoming ruler (sounds like someone has been speaking with his buddy Vladimir Putin!).

A truly adversarial relationship between our leaders and the news media, within reason, is fundamental to our entire system of governance. One of the most disturbing aspects of the Obama presidency is that this principle was nearly completely abandoned, as the press openly led cheers for him before and after his election because of his race and ideology. However, I’m not so sure if the connection between the media and Trump is, in the end, truly much different than it was with Barack Obama.

Let’s take a look at what each party wants from this association and what they are getting from it.

Members of the news media desire four basic things more than all others: job security/advancement, attention, relevance, and easy content. On all four counts Trump has been and will continue to be possibly the best thing that has ever happened to the media, at least since O.J. Simpson (did not) murder two people.

Trump provides the media with huge ratings/traffic, especially during normal down periods. This means that media companies, in the midst of an existential crisis based on a broken business model, make far more money and that those reporting on Trump don’t have to worry about losing their jobs (and, like Megyn Kelly is poised to do, can often get huge raises, whether they are “for” him, or “against” him).

With larger audiences comes more attention, which increases the celebrity (and the bank account) of media members. No one in the media would have likely become suddenly famous covering a Hillary Clinton presidency, but now there is plenty of fame to go around for all of these media narcissists eagerly feeding from the attention trough.

Because of the obviously unique nature of the Trump presidency, and because it is now suddenly cool again (at least among liberals) to “speak truth to power,” the media can now feel as if their role in preserving our Democratic Republic is relevant again. To many in the press, finally bringing down Trump will be akin to Captain Ahab’s quest to capture Moby Dick. After all, not only do they see him (understandably) as a potential threat to our democracy, but also to the long-term relevance of the media itself. For if they can’t even collectively neutralize someone as clearly flawed as Trump, then they may be exposed as being permanently impotent.

Finally, since the vast majority of news media members are incredibly lazy, they thirst for “news” which is handed to them on a silver platter. Real reporting is a grind and usually a thankless endeavor. But in the age of Trump, all the press has to do every morning is turn on their Twitter feed and they have something exciting, new, and provocative to discuss.

Usually, this can happen several times a day so there is no threat of getting bored (like they would have been already if Hillary had won). If one story doesn’t hit traffic gold, a better one is sure to come right around the corner. And now that Trump’s going to actually be the President of the United States, the best part is that the media doesn’t even have to fake it about this crap being newsworthy. He’s the president-elect! EVERYTHING is suddenly real news, even if it isn’t.

So you can see that Trump is actually quite conducive to members of the media achieving all of their primary objectives (did you notice that reporting the truth and making the country a better place wasn’t on the list?). But what is really remarkable is how much the modern news media helps Trump accomplish his goals as well.

As a full-blown narcissist (even worse than Obama), Trump loves attention more than just about anything, more than money and pussy-grabbing. The media has given him more of that in that last 17 months than literally any person has ever gotten in recent history. While most of it has been “negative,” since he ended up winning, and thus validating his entire existence, all of it could now be classified in his mind as “good publicity.”

Trump also needs someone to blame for his failings. Here the news media, thanks to them having completely abandoning all journalistic integrity in the modern era in order to survive this fragmented environment, provides a nearly perfect foil. Most of the public rightly hates and distrusts the press, so having them attack him (poorly) has actually been very good for Trump. After all, if the disgraceful news media distastes him so much that they devote nearly everything to destroying him, then he must not be that bad, and he might even be exactly what we need to shake things up.

Similarly, Trump having a clear enemy in the media (except, of course, for Fox News, talk radio, The Drudge Report, Breitbart.com, etc. which will always keep his base in line) helps him instantly explain away any and all scandals which are not obscenely overt. The facts don’t matter in his world. All he has to do is say this or that has been cooked up by the “crooked” media and his supporters automatically discount it. This is a tactic with which Obama, for instance, could never have gotten away with because it would have been seen as a ridiculous claim. Therefore, having the perception be so pervasive that the media is against him will actually greatly help inoculate Trump from normally disastrous news, and hold onto those who voted for him and who are now completely emotionally invested in not believing that they made a potentially very bad choice.

As is so often the case in this increasingly upside down world, the real truth is frequently the opposite of what is publicly perceived. There may be no better example of that then the symbiotic relationship of the fake rivalry between Donald Trump and the all-too-willing and incompetent news media which has facilitated his rise to the presidency.
— —