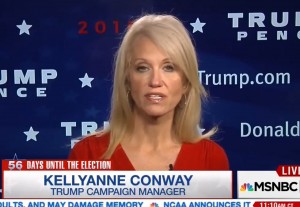 Yesterday, the humor and irony of protesters protesting the NFL over Colin Kaepernick‘s own protesting was presented in this space. Today, we have another example of someone actively and unknowingly doing the thing that they are demonstrably against other people doing.

Donald Trump‘s campaign manager Kellyanne Conway was on MSNBC today to talk to Andrea Mitchell. Mitchell hasn’t been letting Hillary Clinton‘s spokespeople get off easily on questions about the Democratic nominee’s health, so she certainly wasn’t going to let Conway get away with not talking about Trump’s, either. She asked Conway to talk about Trump’s public health reports since everyone is demanding that Clinton release hers and she has so far been complying.

Mitchell specifically questioned the widely-blasted letter from Trump’s doctor that declared he would be the healthiest president in history and wondered what forthcoming reports might look like. Conway responded by complaining about how often Clinton and her staffers turn questions about their campaign around to talk about Trump.

“What I hardly can believe is Hillary Clinton, and really all of her senior team and her surrogates, it takes them about ten seconds or ten words to change an answer about them — on almost anything, Andrea — over to Donald Trump.”

It is unfair to say that Conway is lambasting Clinton for the very same thing she was because, well, it took her 41 words to change the subject and she did claim it only took Clinton 10. Further it took her 12 seconds to do it, not the 10 she claimed for Clinton’s camp.

If she works on brevity and timing, she should get down to 10 words and seconds soon enough.