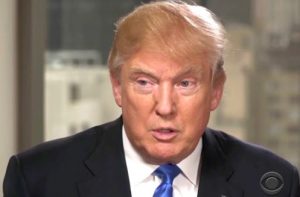 Washington Post reporter David Fahrenthold has been doing his due diligence investigating Donald Trump‘s charitable donations and his foundation. In response, the Trump campaign is lashing out at him.

Farenthold’s latest reporting reveals that Trump used a total of $258,000 from his own charity to settle lawsuits involving his other businesses. He has made various inquiries of Trump and his campaign into questions about the foundation, money he has received, and money he has given away.

This is the statement Team Trump released tonight in response:

In typical Washington Post fashion, they’ve gotten their facts wrong. It is the Clinton Foundation that is set up to make sure the Clintons personally enrich themselves by selling access and trading political favors. The Trump Foundation has no paid board, no management fees, no rent or overhead, and no family members on its payroll.

There was not, and could not be, any intent or motive for the Trump Foundation to make improper payments. All contributions are reported to the IRS, and all Foundation donations are publicly disclosed. Mr. Trump is generous both with his money and with his time. He has provided millions of dollars to fund his Foundation and a multitude of other charitable causes.

The Post’s reporting is peppered with inaccuracies and omissions from a biased reporter who is clearly intent on distracting attention away from the corrupt Clinton Foundation, a vehicle for the Clintons to peddle influence at the expense of the American people. Mr. Trump personally and the Trump Foundation, however, are staying focused on their charitable giving to veterans, the police, children and other deserving recipients.

And campaign manager Kellyanne Conway accused him tonight on CNN of having an “obsession.”

He responded to both thusly:

This is great news. @KellyannePolls , can you tell us abt any specific gifts that haven't already been reported? https://t.co/qJv1rsb6zX

This would be so weird if @realDonaldTrump were not a major party's nominee for president. https://t.co/RfSc2JX2ui

The Trump campaign statement does not, you’ll notice, refute any specific facts in his reporting.