President Trump has not yet moved past the election results last year. And during interviews on his first 100 days with reporters this week, the president took out maps showing those results.

Jeff Mason, the head of the White House Correspondents Association and White House correspondent for Reuters, said on CNN yesterday Trump “sort of interrupted himself and handed out this map of the electoral college and said that these were the latest figures of the areas in the country that he had won in 2016.”

And yes, he showed it off: 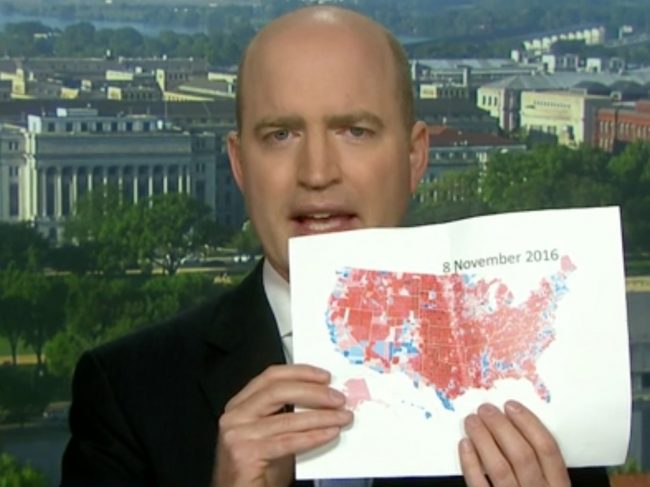 Mason appeared on CNN again this morning (video below) alongside The Washington Examiner‘s Salena Zito (also a CNN contributor), who provided some important context to the president bringing out those maps:

“In context, I had gone in there and asked him about that… I was talking to him about counties and so he brought the map out and started talking. He and I went back and forth about the counties that he won and ones that he flipped from Obama to Trump. So we were having that discussion.”

CNN’s Michael Smerconish said that makes it sound like since Trump had the data already, when he spoke to Reuters next the election was at the forefront of his mind.

Mason did again say that when Reuters was speaking to Trump about China, the president “interrupted himself” to bring this up.

The Washington Post‘s Philip Rucker spoke with MSNBC’s Chris Hayes last night and said he got to see the map too:

.@PhilipRucker says that Trump asked him in their 100 Day interview to run the election map on WaPo's front page. https://t.co/dm8fnagXI9

“He encouraged me to take it home to my colleagues at the Washington Post and try to run it on the front page of our newspaper.”

Hayes jumped in to ask if the President of the United States seriously asked him that. Rucker responded, “He did. I think he was sort of playing there, but it speaks to the pride that he has in that map.”