President Trump Is a Symptom and Proof of Journalism Being Dead, Not the Cause of It 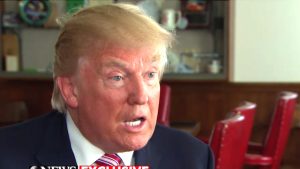 In light of President Trump ducking this past weekend’s annual White House Correspondent’s Dinner so that he could attack the news media in other, less hostile, venues, it is abundantly clear that the relationship between the press and the president has never been worse. It is also obvious that Trump, for the most part, is winning what has now become open combat.

Throughout most of the election campaign and his first 100 days in office, the news media hit Trump with blows which would have easily knocked any previous candidate/president down, if not out. While they got him to wobble a few times, however, they have never really brought Trump to the canvas.

It seems rather obvious now that, barring a massive negative event, that Trump’s base of support has a floor of somewhere around 40% and that those people are completely imperious to anything that the mainstream media reports about him. Polls continually show that massive portions of his voters simply don’t trust the news media enough to ever change their mind about Trump, so unless Fox News Channel suddenly hires Rosie O’Donnell to head their programming, his approval ratings will always remain near at least a subsistence level of support.

There seems to be an understandable temptation to blame Trump and his supporters for this phenomenon. After all, if they just listened to facts and logic, and Trump stopped blatantly lying to them, then they would finally see what fraudulent buffoon he is, right?
Well, I tend to look at this equation differently. Trump didn’t break journalism or render it irrelevant, he simply was smart/lucky enough to take advantage of the circumstances which had already effectively killed it.

Let’s be clear about why journalism is currently dead and how none of this was caused by Donald Trump.

There are at least three basic factors which have destroyed the ability of good journalism to impact events (in case you doubt my premise, just ask Washington Post, which brought down Richard Nixon, but now collects a Pulitzer Prize for negative stories on a candidate who somehow still pulled off a miracle upset win). They are the importance of profits, the influence of popularity, and the impact of fragmentation. All three are also interconnected with each other.

It is no coincidence that journalism is this country had its greatest power during an era when owning a newspaper or a broadcasting outlet was almost literally a license to print money. Good journalism is expensive, not just because it costs a lot of resources to nail down a really good story, but also because you must be able to afford a TON of misses in order to be able find that one great “hit.”

Until fairly recently, news organizations were seen by their owners mostly as “loss leaders” maintained for the public good. However, once the old business model broke, that luxury soon went way. Once news outlets were forced to be profitable on their own, it fundamentally altered journalism for the worse because, inherently, telling the truth about important and controversial matters is very often extremely bad for business. When reporters get worried about losing their jobs, they stop taking the risks which are needed in order to do good journalism, or, even worse, engage in sensationalism in order to survive.

The increased pressure on the news media to make money coincided, unfortunately, with a dramatic change in the way that stories can be evaluated, which came about because of the explosion of social media. In the “golden era” of news, no one had any idea whether a particular story, or even an entire subject, had been popular or not. Editorial decisions were mostly, get this, made based on substantive considerations.

All anyone knew back then was whether a story was good reporting, or not. Today, every single story, at just about every outlet in the country, can and is evaluated instantly based on Internet traffic, Twitter retweets, Facebook likes, and highly-specific overnight ratings.

The tail is now completely wagging the dog. The popularity of a report is now ALL the matters and it has now become part of the news media’s DNA to evaluate what stories to do, and how to do them, based solely on how popular they are likely to be.

This means that popular myths get routinely elevated over unpopular realities, and it has reduced the truth itself from a heavyweight champion, to a 98-pound weakling. Consequently, the news media has been caught with their hand in the “fake news” cookie jar many times and trust in their credibility has understandably eroded dramatically. As I have often said, if CNN wanted people to trust it when it came to the Trump/Russia saga, perhaps they should have thought twice about obsessively chasing a missing Malaysian plane for months straight back in the spring of 2014.

Finally, all of this has occurred simultaneously with the most dramatic fragmentation of all of our media in the history of the United States, if not the word. There have never been more national outlets from which people can get their “news,” almost literally constructed to appeal to their personal beliefs and sensibilities.

This has caused two very important developments. First, people can easily avoid/discard any news they don’t like because somewhere there is an outlet which is happy to tell them, for instance, that Trump really was right about his crazy “wiretapping” claims. Second, huge numbers of Americans are able to avoid substantive news completely so that even when a big story breaks it doesn’t have nearly the impact, or the staying power, that it used to have.

Add to all of this our incredibly shrinking attention spans, and you can see how easily Trump really does benefit from having so many scandals. The news media, in their constant and desperate search for something “new” with which to satiate us, spastically moves on to the next one before any of them ever have a chance to sink into our collective consciousness.

As a “Never Trump” conservative, my biggest objection to Trump has always been that he has no regard for the truth and cares mostly about his own fame and fortune. Ironically, the very same thing can be said about most of the news media, which is probably why Trump is able to manipulate them so well and why these two entities really do deserve each other.

I would like to say that America itself actually deserves better than both of them, but I really hate lying.