Trump is Right: Hillary Really is Playing the ‘Woman Card’ 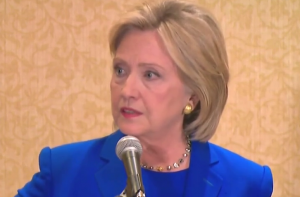 Presidential candidate Donald Trump recently accused Hillary Clinton of playing the “woman card,” a remark that she took great offense to despite the fact that she’s absolutely been playing the woman card since day one.

Let’s get this out of the way: yes, Trump is a misogynistic ass with the IQ of a rotten yam (albeit a rotten yam with a yam dad who was rich enough to get him into Wharton School of Yam Business). Yes, he’s only saying this to get attention, and the typically clueless media are more than happy to oblige him. But a stopped clock is right twice a day and this happens to be one of those instances.

I won’t spend too much time laying out all the times Clinton and her campaign have implied or stated outright that people should vote for her because she was a woman, because a) there are waaaaay too many examples, and b) I already did that when Bernie Sanders supporter Killer Mike laid similar charges at her door. Here’s just the instance I consider the most egregious, an Clinton ad entitled “44 Boys Is Too Many”:

There’s nothing sly about this. There’s no dog whistle or subtext. The Clinton campaign cut an ad that explicitly tells people they should vote for her because she’s a woman, and otherwise little girls would cry.

If Clinton’s appeal to her gender had been isolated to eyeroll-inducing pandering, it would be merely irritating. But she also doesn’t shy away from appealing to her gender to shut down serious questions about her qualifications. Here’s an attack from Sanders in the last MSNBC debate, and Clinton’s response.

So, Rachel, yes, Secretary Clinton does represent the establishment. I represent, I hope, ordinary Americans, and by the way, who are not all that enamored with the establishment, but I am very proud to have people like Keith Ellison and Raul Grijalva in the House, the co-chairmen of the House Progressive Caucus.

CLINTON: Well, look, I’ve got to just jump in here because, honestly, Senator Sanders is the only person who I think would characterize me, a woman running to be the first woman president, as exemplifying the establishment. And I’ve got to tell you that it is… (APPLAUSE) It is really quite amusing to me.

Clinton has used the same line on two other occasions, indicating that it’s almost certainly a canned line cooked up by the campaign to shut down the “establishment” charge. That Clinton actually argued that her gender made her immune to being part of the establishment was an embarrassment, that the Democratic audience ate it up even more so.

Ironically, Clinton’s response to the accusation that she was running on her gender was itselfstarkly gendered. “I have a lot of experience dealing with men who sometimes get off the reservation in the way they behave and how they speak,” she told CNN. “I’m not going to deal with their temper tantrums or their bullying or their efforts to try to provoke me.”

In other words, Trump is a man who’s attacking me, a woman. Granted, Trump was the one who dragged gender into the discussion, but she was given a chance to take the high road and say the whole thing was irrelevant and she wanted to campaign on the issues. Or, she could turn it into a battle of the sexes. Who was surprised when she chose the latter?

Trump definitely overreached by saying that Clinton was only running on her gender. He also made an unforced error by saying she’d only win 5% of the vote if she were man. That turned what should have been an attack on Clinton into an attack on the voters: the clear implication was that women voters in particular were stupid rubes only voting on demographic considerations.

But the central thrust of his argument is undeniably true: Hillary Clinton is running a campaign that in large part relies on her playing the “woman card.” Hating Trump doesn’t make it any less so.