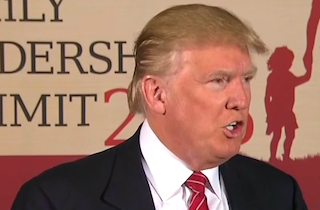 Donald Trump‘s campaign is still reeling from an article where his lawyer, Michael Cohen, made some bizarre comments on marital rape, while also threatening the reporter. On Tuesday night, The New York Times reported on a series of resurfaced depositions where Trump quickly got heated with one of his lawyers while discussing a real estate project.

In 2007, Trump was facing two lawsuits over a project in Florida, when one of the opposing lawyers, Elizabeth Beck, called for an hour-long recess so that she could pump breast milk for her young daughter. Her husband and co-counsel Jared Beck, reportedly said that Trump was disgruntled during the meeting, calling her “uptight” and her questions “stupid,” until he had enough with Beck’s request.

“You’re disgusting,” he allegedly told Mrs. Beck before leaving the room and ending the testimony for the day.

The two cases dealt with a dispute where Trump was accused of misleading home buyers about his role as a developer for two real estate projects, when he was actually licensing the Trump brand only.

Alan Garten, Trump’s lawyer at the time, did not challenge Beck’s account but said even though she only showed the pump to make a point, “it was solely the fact that she was appearing to do it in the middle of a deposition.”

The report also cited sworn testimony from Trump as he was addressing home buyers who had to forfeit thousands in down payments on one of his building. “Congratulate your clients,” Trump reportedly told the Becks, saying the clients were “very lucky” the project failed before the 2008 recession.