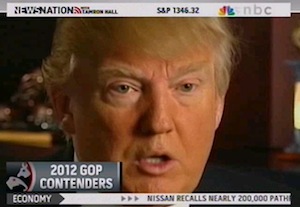 During yesterday’s press conference, President Obama immediately understood where he needed to lay blame for the month-long political “apprentice” series starring Donald Trump: with the star himself AND the media that obsessed over his “silliness.” Obama chided, “during that entire week the dominant news story wasn’t about these huge, monumental choices that we’re going to have to make as a nation. It was about my birth certificate.”

There is an old Midwestern saw that says “you can’t blame a dog for being a dog,” an especially apt idiom for a publicity hound like Trump. More important, however, is how is how this idiom also applies to the media. Trump is a spectacle in much the same way Fred Phelps of the Westboro Baptist church and Koran buring Terry Jones have become, and he should be treated in a similarly discriminating way. The media is immediately drawn to these fringe figures, not out of some political bias, but of a bias towards built-in conflict.

But wait! Julie Moos and the Poynter institute pointed out a study that challenged the President’s observation, noting that it comprised only 4% of the news coverage, compared to 39% on the economy. Maybe so, but the cable news world, in particular, was a different story.

Donald Trump started tilting at the birther windmills on March 17th during an interview with Good Morning America. Using television transcript database TV Eyes, which allows us to search terms mentioned on cable news channels, it’s clear that Donald Trump and the birth certificate story received a lot more attention than more serious issues at hand, like say, the war in Afghanistan, or the budget deficit.

Following is a helpful chart that illustrates how cable news channels covered a variety of stories between March 17th and April 27th:

What can one conclude from the previous chart? That Trump’s campaign and the Birther issue received far more cable news coverage than Afghanistan and the “budget deficit” combined, although it is remarkable to see that Fox News and CNN had exactly the same number of references to Afghanistan as to Donald Trump in the entire period.

This is not to say that the cable news channels should have ignored Trump’s birther claims entirely; rather, he should have been treated in the manner in which he deserved: as a fame-whoring spectacle, with constant reminders to the viewers of his naked attempts to get attention. Imagine if Trump had been treated in his earliest interviews regarding the birth certificate with half of the enthusiasm and grit that Lawrence O’Donnell treated Orly Taitz with last night . Had Trump’s publicity campaign initially been presented from the margins, we’d likely never had seen the super bizarre Obama press event yesterday when, yes, the President of the United States responded to media pressure to confirm that he’s really an American citizen. Yes, that really happened.

So what can the viewer do? Sadly not a whole lot, but one is reminded of a Halloween episode The Simpsons featuring a bizarre segment that focused on advertising icons and trademarks who had come to life and were terrorizing the town of Springfield. To defeat them, singer-songwriter Paul Anka magically appeared and taught young Lisa a simple ditty that goes “Just Don’t Look,” built upon the idea that without eyeballs and attention, these media monsters will die from lack of attention, which of course they do. That vignette could be a zen fable for the new media age. If a controversy roils, but no one is there to cover it, does it make a sound?

The problem is that the combination of a microscopic news cycle and an infinite maw of airtime makes it damn near impossible to pass up a flaming fireworks factory like Trump, or his closest analog, Charlie Sheen. In both cases, the media devoted ridiculous amounts of uncritical coverage to stories with next to no news value, and were rewarded handsomely for their crime (as a site that covers the media, we are as guilty as anyone of saturation, but we believe we handled the issue responsibly and critically).

The only cost to cable newsers has been in credibility, but unfortunately, that’s a hopelessly devalued currency these days.