Trump Says He Has ‘No Interest’ in Launching TV Network
audio

Trump Says He Has ‘No Interest’ in Launching TV Network 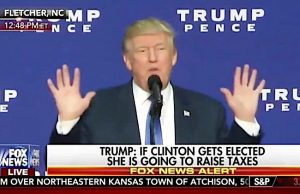 Trump told a Cincinnati radio host Tuesday morning that he had “no interest in Trump TV,” a widely speculated post-election network launch the GOP candidate might pursue should he lose on Nov. 8.

On the night of the third and final presidential debate Wednesday, Trump’s campaign produced almost four hours of Facebook Live content consisting of commentary from Trump campaign staffers, surrogates, and supporters. Many surmised that broadcast acted as a soft launch for a potential Trump TV network.

The campaign has been using the hashtag #TrumpTV to promote its live streaming videos. On the air, Sims referred to the broadcast as “Trump Tower Live.”

Trump told Sloan that he was not interested in developing the project beyond the election, as he was confident that he would win the presidency and could devote his attention to “making America great again.”