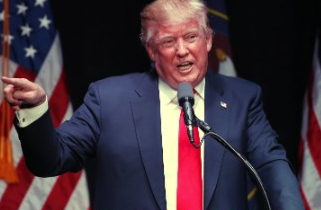 American historians will definitely remember this as the week Donald Trump got tired of the constant criticism of his lack of foreign policy knowledge. The last straw came when he responded to questions about the identity of his consultants with, “I’m speaking with myself.” He eventually released a list of his foreign policy advisers and it still wasn’t good enough.

He agreed to a long-winded interview with The New York Times to clear up any confusion over this foreign policy plans. (Note that he has insulted the publication repeatedly.)

Other highlights include the following.

DAVID E. SANGER: It was George W. Bush himself.

On spying on American allies:

TRUMP: [I]t’s not so much with [Angela] Merkel, but it’s certainly with other countries. You know, that really, where there’s, where there’s a different kind of relationship, and a much worse relationship than with Germany. So, you know there’s so, there’s such predictability with our country. We go and we send 50 soldiers over to the Middle East and President [Barack] Obama gets up and announces that we’re sending 50 soldiers to the Middle East. Fifty very special soldiers. And they now have a target on their back, and everything we do, we announce, instead of winning, and announcing when it’s all over. There’s such, total predictability of this country, and it’s one of the reasons we do so poorly. You know, I’d rather not say that. I would like to see what they’re doing. Because you know, many countries, I can’t say Germany, but many countries are spying on us. I think that was a great disservice done by Edward Snowden. That I can tell you.

On no longer buying oil from Saudi Arabia until they put boots on the ground to defeat ISIS:

MAGGIE HABERMAN: Mr. Trump, you have talked about your plans to defeat ISIS, and how you would approach it. Would you be willing to stop buying oil from the Saudis if they’re unwilling to go in and help?

SANGER: On the ground?

TRUMP: Oh yeah, sure. I would do that.

HABERMAN: Would you, you were just talking about the nuclear world we live in, and you’ve said many times, and I’ve heard you say it throughout the campaign, that you want the U.S. to be more unpredictable. Would you be willing to have the U.S. be the first to use nuclear weapons in a confrontation with adversaries?

For the rest of the interview, check out NYT.