Trump Slams Hillary in Prebuttal to ‘Old, Tired’ Speech About his Racism

Trump Slams Hillary in Prebuttal to ‘Old, Tired’ Speech About his Racism 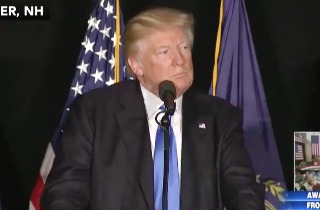 Donald Trump held nothing back on Thursday when he used his speech in New Hampshire to tear into Hillary Clinton over her plans to attack him for being a racist.

The former Secretary of State is giving a speech today, and it will be themed on how Trump’s campaign has become incredibly far-right, and has essentially mainstreamed fringe political views. Trump called Clinton a “bigot” last night for viewing American minorities as nothing more than free votes, and today, he ripped her for painting him and his supporters as blatant racists.

DJT: “When Democratic policies fail, they are left w/ only this one tired argument: ‘You’re racist. You’re racist.'” pic.twitter.com/mGKmtxOZ49

Trump’s remarks also come as retaliation for Clinton’s new campaign ad, in which she attacked him by highlighting his support from Neo-Nazis, the KKK, and white nationalists. Clinton also used the ad to highlight Trump’s hiring of Stephen Bannon, the chief of Breitbart.com and a major player in the alt-right political sphere.