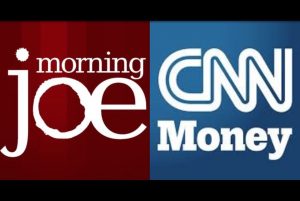 This past weekend in the college sports world, we were treated to everyone’s favorite scheduled games of the year: Rivalry Week, the time when the biggest gridiron rivals square off. And just as Michigan v. Ohio State did not disappoint, it would seem as if the world of cable news has taken a page out of NCAA’s playbook with the newest chapter of a long-running spat.

I’m talking of course of the CNN Money Media Team v. Morning Joe rivalry, which came in the form of an unexpected trip to Trump Tower on Tuesday by MSNBC anchor Mika Brzezinski.

While the Morning Joe cohost said that she was not anticipating on facing the media head-on during her visit, speculation spread through political media Twitter in mere minutes. Immediately, the long and well-documented relationship between Mika Brzezinski, Joe Scarborough, and Donald Trump was invoked, leaving many wondering why Brzezinski was going straight to Trump Tower following the completion of her show.

Dylan Byers of CNN Money reported that Brzezinski was actually there to see Ivanka Trump regarding the former’s successful “Knowing Your Value” conference and panel series empowering women in the workplace.

More details… Meeting is about getting Ivanka Trump involved in Brzezinksi’s “Knowing Your Value” conference series, per source … https://t.co/AI8r0QZt0T

Brzezinski shot back at Byers defiantly:

Donald Trump has been President-elect for just over three weeks, and a bit of original reporting mixed with wrong-place-wrong-time resulted in the newest installment of this cable conflict. Even Cuomo reintroduced himself into the middle of the war, calling the MSNBC stalwarts “transition spokesmen.”

They have always been boosters. Things turned south when trump froze them out but coverage always stilted. They are transition spokesmen now https://t.co/gkW16uMPJ3

Byers didn’t shy away from the conflict in the CNN Money newsletter Tuesday night, which he published in Stelter’s absence:

But it was the last word used by Brzezinski in her Tweet — “again” — that indicates that this was just the latest in a series of back-and-forths between the factions over original reporting, cozy relationships, and hotel room hangouts.

Byers, CNN’s Senior Reporter for Media & Politics, has reported on Brzezinski and her cohost Joe Scarborough before, resulting in a contentious dynamic that has largely played out over the airwaves and on the Twitter feeds of our industry.

Take, for example, this February incident in New Hampshire; on the night of the primary in the Granite State, Byers and Tom Kludt reported that the Morning Joe duo “hung out in Trump’s hotel room” to watch primary returns. Kludt wrote:

It took only minutes for Joe Scarborough to respond, alleging that Byers and the CNN team, “spread[s] a different lie,” every day.

Did CNN hire you just to lie about Morning Joe? The obsession is unhealthy. I love CNN media “reporters” https://t.co/gBcBZ51kDw

“My sources are right,” Byers responded firmly at the time. He continued by asking Scarborough, “[W]ould you like to state on the record that you guys were not in Trump’s hotel room last night?”

Members of the CNN Money team, including Brian Stelter, have long used the word “cozy” to describe the dynamic shared between Donald Trump and Brzezinski/Scarborough. Trump told them at the end of a phone hit earlier this year, “You guys have been supporters,” a frequently-cited moment in their public relationship. Morning Joe distanced itself from the comment.

At different times of the spat, MSNBC has leaned on a recurring point of emphasis, one that President Phil Griffin reinforced in a statement to Mediaite earlier this year: “Joe and Mika are doing great and they’re beating CNN soundly in the mornings.” Scarborough in one Twitter exchange with Byers alleged, “I understand you guys resent that we double your audience every day, but enough of the lying.”

And Byers isn’t the only CNN-ite who has chosen to lob some of his efforts against 30 Rock. New Day anchor Chris Cuomo has, from time to time, weighed in about the Scarborough and Trump friendship, writing this June on Twitter, “Joe [Scarborough] was trump’s booster!”

Cuomo went on to call it, “Hypocrisy at the highest level.”

Hypocrisy at highest level from guy who had trump the most and was the least exacting. https://t.co/rdvADGOdFS

The New Day anchor also said this summer that Trump would go “on [television] with friends and mak[e] sure that he can clean up and reclassify anything that he doesn’t like about how the interview went yesterday.” Those “friends” for the record are — you guessed it — Brzezinski and Scarborough.

Then, without calling them out directly, Scarborough took a thinly-veiled shot at who he called “you people” the week before the presidential election against members of the media who claimed Morning Joe supported Trump’s candidacy. “God, you people,” Scarborough said November 4th. “You need to do your job and be journalists. You’re really disgusting.” I surmised at the time that CNN was likely the target of his ire.

While Trump has been reluctant to openly disrespect Scarborough and Brzezinski in quite some time (and with the notable exception of Katy Tur, most of MSNBC for that matter), the President-elect has used every opportunity to rail against CNN. His supporters refer to the cable giant as “Clinton News Network,” and he alleged this week that the network “is so embarrassed by their total (100%) support of Hillary Clinton… that they don’t know what to do.” This war of words is likely to continue in this strange dynamic as Trump’s transition efforts heat up. But it begs the question: is this a battle between Byers/CNN Money and Morning Joe with Trump as a side player, or is it Trump v. CNN with Brzezinski/Scarborough playing supporting parts?