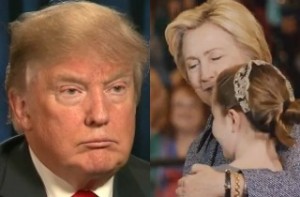 And so ends the worst week of Donald Trump’s campaign…

As those who visit here daily know, the presumptive GOP nominee has been called Teflon Don(ald) in this space on more than a few occasions. Declare John McCain isn’t a war hero and double down on it when called out? His numbers go up. Criticize Carly Fiorina’s face? His numbers aren’t hurt. Make part of your central platform a ban on Muslims entering the country for security reasons? The political class reacts in horror while polls show a majority of Americans support the idea. Attack Ted Cruz’s wife, complete with visual aides? He essentially clinches the nomination in Indiana that same week.

You get the idea. And so did political pundits of all stripes, who aren’t nearly as influential as their Twitter feeds tell them they are. Because after seemingly everyone for months would slam Trump and tell us this really, really was the end of his run (myself included), they simply started admitting the candidate wasn’t like any other one before him in that what should hurt him, even finish him, Trump becomes Kanye: Na-na-na that that don’t kill me. Can only make me stronger…

But then the criticism of an American judge (born in Indiana) with Mexican heritage presiding over a case against Trump University came to the forefront as May became June. Short version: Trump claimed the judge was biased against him because of said heritage and therefore couldn’t rule impartially. That claim immediately exploded into charges of racism by the same pundits mentioned earlier, along with many from politicians themselves, most notably from House Speaker Paul Ryan.

But this time the charge appears to actually be having a negative effect on Trump. He even stopped Tweeting for almost a day this week (he usually averages 18 per day). His victory speech for officially clinching the Republican nomination was guided by a teleprompter in an attempt to keep him on a tight leash. Trump says he isn’t going to talk about the judge anymore, and that’s really the only strategy worth employing right now… because the more he tries to explain his logic away, the quicker the quicksand works.

While all of this is happening, Hillary Clinton officially clinches the Democratic nomination in style. A loss in California would have been symbolically devastating to the former Secretary. But after convincingly beating Bernie Sanders by double-digits in the Golden State, the wind is out of the Vermont senator’s sails as the party heads to its convention next month. President Obama — he of an 82 percent approval among Bernie voters (NBC News/Wall Street Journal) and a 49.2 percent in the Real Clear Politics average overall — also endorsed Clinton earlier this week as expected. As noted here last week, the president provides her a 1-2 punch on the campaign trail Trump does not have until he picks a solid running mate… and even the president’s critics will admit there’s no better campaigner in the game right now.

As a result of all of this, a Fox News poll released Thursday evening shows Trump and Clinton still in a dead heat (Clinton +3 instead of the other way around as was the case in May) but Trump down 11 points among independents from the previous poll. Interestingly, Clinton’s numbers are exactly the same as the poll prior: 42 percent in May, 42 percent now… perhaps showing her brand is so known, so established… it may be difficult to move notably upward.

Either way, the next poll will be the most interesting to watch: Will Trump continue to slide? Is what worked in the primary no longer applicable in the general?

FNC’s Chris Stirewalt made one of the better analogies around Trump’s challenge as we head into the summer by comparing him to Tim Tebow yesterday on The Kelly File:

“Tim Tebow was a great college quarterback when he played for Florida and did all kind of great stuff. But he couldn’t stay on the New York Jets when he got to the NFL. And the deal is, you’ve got to play a different game in a different level, and it’s a different thing to be in the general election than it is to be in the primary. And also, when he’s in the primary, he had some guys who were dopes that he was smacking around pretty good, and by the way the press is rooting for him as he’s beating up Republicans. And then you get to the general election, he turns and the press treats him differently and his opponent is different.”

Note: Tebow — who did win a playoff game for the Broncos before his ill-fated experiment with the Jets — is now out of the league altogether. He would later sign a contributor contract with ABC’s Good Morning America in 2014.

June 3rd to June 10th: Mark it down as the worst week of the Trump campaign for president. It ain’t even close… and that’s saying something.

The big question is: In a time when news cycles come and go quickly, will what hurt Teflon Don(ald) over the past seven days actually stick?