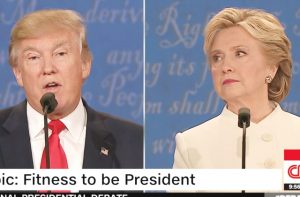 It is an interesting phenomenon within the human condition that our standards for what is shocking can be altered with remarkable speed. The best example in my lifetime was the difference between what we thought was incomprehensible on the morning of 9/11 as opposed to the afternoon of that fateful day.

Since this appalling election is so far the “peaceful” political equivalent to 9/11 (in the sense of us being exposed to things we never thought we would see), it should be expected that events which would have shaken the earth in prior cycles would suddenly not have that much impact. To me, that was the theme of the third and, thankfully, final presidential debate.

Most of the post-debate attention and outrage has been understandably focused on Donald Trump’s refusal to assure the American public that he will accept the results of the coming election. He even teased about this incredibly serious topic as if he was back hosting Celebrity Apprentice, saying “I’ll keep you in suspense.”

This is, as most reasonable people will likely agree, insane, unwarranted, and dangerous. He has already been rightly vehemently criticized by the news media and Republican lawmakers for selfishly undermining the faith in our election system. To be clear, our election structure does indeed have legitimate flaws which need to be fixed and which Democrats are far more likely to be able to take advantage of than Republicans, but there is no chance that the presidential election is remotely “rigged.”

What was most interesting about the “concession” issue (and mostly lost in the post-debate analysis) is that Trump, probably setting another first in presidential debate history, effectively DID concede the election. While referring to the problem of refugees coming into the country Trump told her, “Lots of luck, Hillary,” which was clearly a reference to the quandary he thinks she will face once she is president.

However, those two unprecedented moments from the debate were hardly the only things that happened which in a “normal” year would grab headlines instead of being reduced to footnotes.

How about Trump, who once again proved at the start of the debate that he can be plausibly presidential for spurts of about 20-25 minutes at a time before collapsing back into his real personality, praising President Obama on illegal immigration? Based on how he described “big league” deportations under the current administration it made me wonder why, since he ended the debate by saying that Hillary Clinton would be a third Obama term (by the way, how “brilliant” is it to leave the audience with that thought when the president has a 53% approval rating), what the big deal about his signature issue really is.

Trump referring (apparently) to criminal illegal immigrants as “bad hombres” will indeed get a lot of discussion. It was a really dumb thing to say at a presidential debate, but frankly I think it is receiving too much attention. The reality is that the vast majority of illegal immigrants who commit violent crimes in this country are indeed from Central America. But obviously truth doesn’t really matter much in politics.

In the old days (2012) Trump vigorously declaring that he has never “met” Vladimir Putin when he has been on the record several times, including at a GOP debate, strongly implying that he has, would be big news. My guess is that, while the Russia/Wikileaks connection may get some play, Trump’s lies about his relationship with Putin will get lost in the avalanche of insanity.

One of the more remarkable moments of the debate occurred when Hillary confronted Trump about an under-reported Newsweek story that his company has been buying Chinese steel at the cost of American workers. Instead of denying the truth of the accusation (you know a story has to be REALLY solid if Trump isn’t even willing to try to dispute it) he laughably blamed Hillary for not stopping him, as if a First Lady/Senator/Secretary of State could ever have such authority. For Trump, running on the nationalist platform that his is, to blame Clinton for not stopping his hypocrisy is like a sinner passing off the responsibility of his bad acts on a friend of the priest who took his previous confession.

A similar moment came when Trump ferociously attacked Hillary over the Clinton Foundation (where Hillary gave one of her worst “answers” of the night, clearly not answering the question about “conflicts” at all). Trump lit into her for the foundation having legally accepted millions of dollars from Arab/Muslim countries who systematically mistreat women. Clinton blew a great chance at rebuttal by not mentioning that Trump himself has done millions of dollars in business with some of the same countries (though I guess he would have simply blamed her for not stopping him if she had brought it up).

Trump also made history by being the first “Republican” candidate for president to ever go completely out of his way to criticize Ronald Reagan, something Hillary never did during the debate. Reagan’s adopted son Michael even tweeted during the debate that Hillary had clobbered him on the Putin issue.

Finally, there was the “such a nasty woman” remark by Trump as he interrupted her reminding the audience that Trump apparently pays no income tax. This actually may end up being the most significant moment from the debate from a purely electoral standpoint. Any chance that women who were on the fence about bothering to turn out for Hillary staying home on election day is now pretty much finished.

So is this race. I declared it over weeks ago, so I can’t really do so again, but the reality is that this debate did nothing to revive a dead patient. This election is now about how much Trump will be repudiated and how large the Democrat gains in Congress will be.

I will give Trump credit for one thing and one thing only. He has single-handedly done something I, as long-time ardent Clinton critic, never thought was remotely possible: I inexplicably now feel somewhat okay, considering what the alternative is, with the coming Hillary presidency.

Much like my 9/11 analogy, Trump has somehow made something previously horrific actually seem possibly bearable by comparison.