Tucker Carlson: ‘Unfair’ to Prevent Employees from Criticizing Fox, But ‘I Don’t Know What to Do About It’
video

Tucker Carlson: ‘Unfair’ to Prevent Employees from Criticizing Fox, But ‘I Don’t Know What to Do About It’ 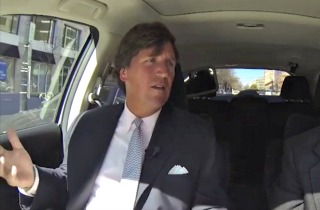 Daily Caller founder and Fox & Friends Weekend host Tucker Carlson has been steadfast in defending his decision to pull a column on his website that was critical of Fox News. The decision led the column’s author, Mickey Kaus, to quit his job. In an new interview, Carlson said straightforwardly, “we [The Daily Caller] are” the website that does not criticize Fox, admitting that rule is “unfair.”

“I have two rules,” Carlson explained to Carl Cannon of RealClearPolitics. “One is you can’t criticize the families of the people who work here, and the other is you can’t go after Fox.”

The reason for the second rule, Carlson said, is not because Fox is “conservative” or “we agree them,” but it’s simply because he works there. “Yes, it’s a conflict, for sure,” that he owns The Daily Caller and also works for Fox, he said.

“That’s a conflicted situation, but I don’t know what to do about it,” Carlson admitted. “There is a conflict and I’m totally up front about it, I don’t lie at all, and you don’t criticize your employer, and that’s kind of 101.”

He added that Daily Caller staff are given “total editorial freedom” besides those two aforementioned rules: “Is that unfair? Yes, it is. But that’s what it is.” His final defense? “Unlike everyone else, I’m not a bullsh*tter.”

Watch the video below, via RealClearPolitics: