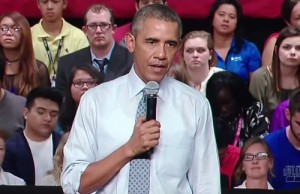 President Obama strongly expressed his concerns with the brewing political correctness trend on college campuses and in college classrooms in America.

During a town hall meeting focused on college affordability in Des Moines, Iowa, a student asked Obama about whether or not he agreed with Ben Carson‘s plan to cut funding from colleges that demonstrate a political bias. He didn’t, though the question spurred the president to discuss a related matter, recently broached by a cover story in The Atlantic, per Vox’s observation.

“It’s not just sometimes folks who are mad that colleges are too liberal that have a problem,” he told the crowd. “Sometimes there are folks on college campuses who are liberal, and maybe even agree with me on a bunch of issues, who sometimes aren’t listening to the other side, and that’s a problem too.”

I’ve heard some college campuses where they don’t want to have a guest speaker who is too conservative or they don’t want to read a book if it has language that is offensive to African-Americans or somehow sends a demeaning signal towards women. I gotta tell you, I don’t agree with that either. I don’t agree that you, when you become students at colleges, have to be coddled and protected from different points of view. I think you should be able to — anybody who comes to speak to you and you disagree with, you should have an argument with ’em. But you shouldn’t silence them by saying, “You can’t come because I’m too sensitive to hear what you have to say.” That’s not the way we learn either.

Libby Nelson of Vox connected Obama’s use of the word “coddled” to the viral Atlantic article, “The Coddling of the American Mind” from September. In it, authors Greg Lukianoff and Jonathan Haidt wrote about so-called “trigger warnings,” tools demanded mostly by students to “scrub campuses clean of words, ideas, and subjects that might cause discomfort or give offense.”

Obama’s use of a distinct word from that article’s title is telling, especially since it feeds directly into his opinion on the whole matter. That is, that mostly-liberal students’ insistence on a hyper-PC culture isn’t good for education, and is especially bad for democracy.

UPDATE–4:22 p.m. ET: Here is a video clip of Obama’s remarks from the town hall meeting in Iowa: