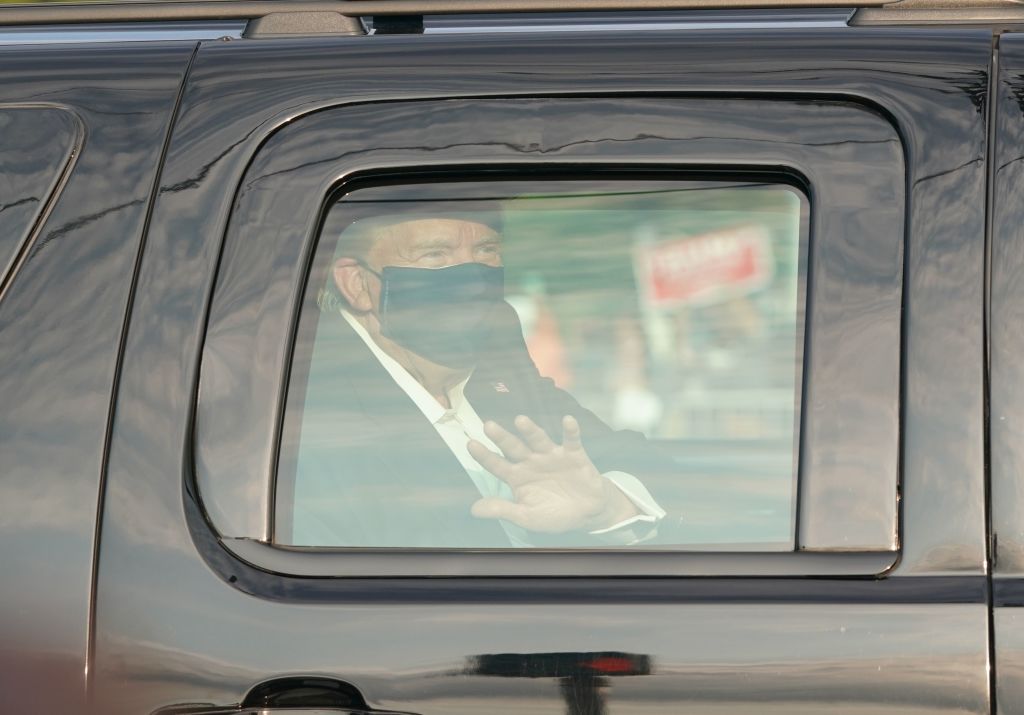 Twitter users reacted with shock and dismay at President Donald Trump‘s short excursion in a black SUV around the streets surrounding Walter Reed hospital, where he is receiving treatment for Covid-19, with many expressing concern for the Secret Service agents traveling with him in the enclosed vehicle.

The president was admitted to Walter Reed on Friday, and has experienced symptoms including a high fever, fatigue, and trouble breathing. Conflicting information has been reported from the president’s medical team and members of the White House staff, speaking both on and off the record.

In an apparent effort to encourage his supporters and project an image of strength, Trump has posted several photos and videos from Walter Reed and then took the short, unannounced ride in the back of a black SUV as he waved to the supporters surrounding the hospital. The entire trip lasted only a few minutes and the presidential motorcade returned to Walter Reed.

The White House did not give notice to the press corps that Trump was planning this car ride, and the White House Correspondents’ Association reacted with swift condemnation, issuing a statement saying it was “outrageous for the president to have left the hospital — even briefly — amid a health crisis without a protective pool present to ensure that the American people know where their president is and how he is doing.”

“It is outrageous for the president to have left the hospital — even briefly — amid a health crisis without a protective pool present to ensure that the American people know where their president is and how he is doing.” pic.twitter.com/oBlNNPCHZS

Much of the other online reaction was similarly negative, with many noting the close quarters and enclosed environment inside the SUV with the president, who is known to be experiencing symptoms and viewed as highly contagious. Secret Service agents, of course, sign up for the duties of the job knowing full well they could have to give their life to protect the president, but a completely optional trip to wave at supporters struck many as an unnecessary risk.

sending my best wishes to the Secret Service agent driving the active Covid patient in a car with the windows rolled up https://t.co/8lcQ4wtXOJ

USSS agents know when they sign up that they could be killed in an effort to protect the president.

There was absolutely no reason for the president to put their health at risk by doing this. A mask is not full proof…especially in a heavily armored car with windows rolled up. https://t.co/LjYLFSTD10

Medical professionals have repeatedly said wearing a mask is just one step. Social distancing and not gathering indoors (or in a car) unnecessarily is also critical.

Transporting POTUS is something that can’t be avoided…but a drive by to greet supporters isn’t necessary https://t.co/NwKG8EPX0I

The members of the @SecretService presidential protective division do serve to risk their lives for the president.

But not in this frivolous way.

And he’s a pathetic and complete disgrace. pic.twitter.com/P75M5hv84O

The agents in the car with him…my God https://t.co/Ncf7oaZ2Sb

It is so very obvious that the number of people who should be exposed to the president right now is “the exact number required to give him the medical care he needs and not one more” https://t.co/lnLdyqoLot

Every single person in the vehicle during that completely unnecessary Presidential “drive-by” just now has to be quarantined for 14 days. They might get sick. They may die. For political theater. Commanded by Trump to put their lives at risk for theater. This is insanity.

Just sent this video to a Secret Service source who responded: “So reckless and careless and heartless” https://t.co/5DE6Y9GSEe

I continue to be amazed, even four years into this, at not just Trump’s pathological narcissism but the way those around him (doctors, staffers) continually indulge it, even when it means putting others and himself at greater risk. https://t.co/z9kXfDACWt

He’s hot boxing the secret service, his driver & anyone else in the car with Covid germs cause he felt like taking a drive https://t.co/ByY038QLm4