USA Today is frantically walking things back after erroneously reporting the death of one of America’s most esteemed novelists and playwrights.

Cormac McCarthy, known for writing Blood Meridian, The Road, and No Country for Old Men, was said to have died from a stroke according to these now-deleted tweets. 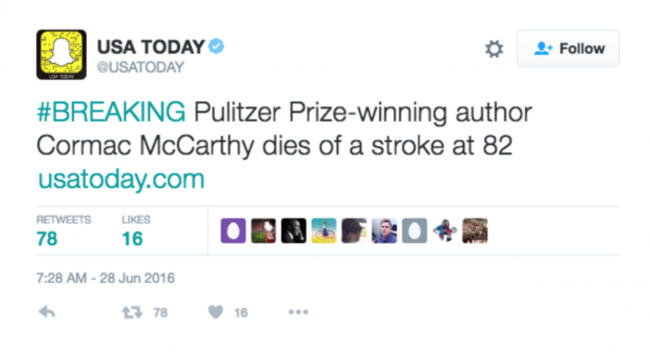 The rumor seems to have originated from a Twitter account that Italian journalist Tommasso Debenedetti used to impersonate publisher Alfred A. Knopf.

This account is hoax created by Italian journalist Tommasso Debenedetti. McCarthy is alive and well.

Approximately 15 minutes after the initial tweet went up, USA Today put up new tweets conceding that they jumped the gun.

Of course, the Internet is eternal, and the original tweet was up long enough for people to poke fun of it.

Cormac McCarthy is alive and well and still doesn’t care about Twitter.

BREAKING: The entire continent of Australia just sank beneath the Earth’s crust; I am looking into this report to verify its authenticity.

BREAKING: We were totes first to report news based on a fake Twitter account.
UPDATE: We might’ve gotten that wrong. pic.twitter.com/0TLtVpe9fO

It’s generally a good idea to do that *before* tweeting that someone has died pic.twitter.com/iRy7cv7NTk

PSA: Mel Brooks is trending because he’s 90, not dead. Thanks for proving you can make more with a flop than a hit: https://t.co/T7V5XyrixK