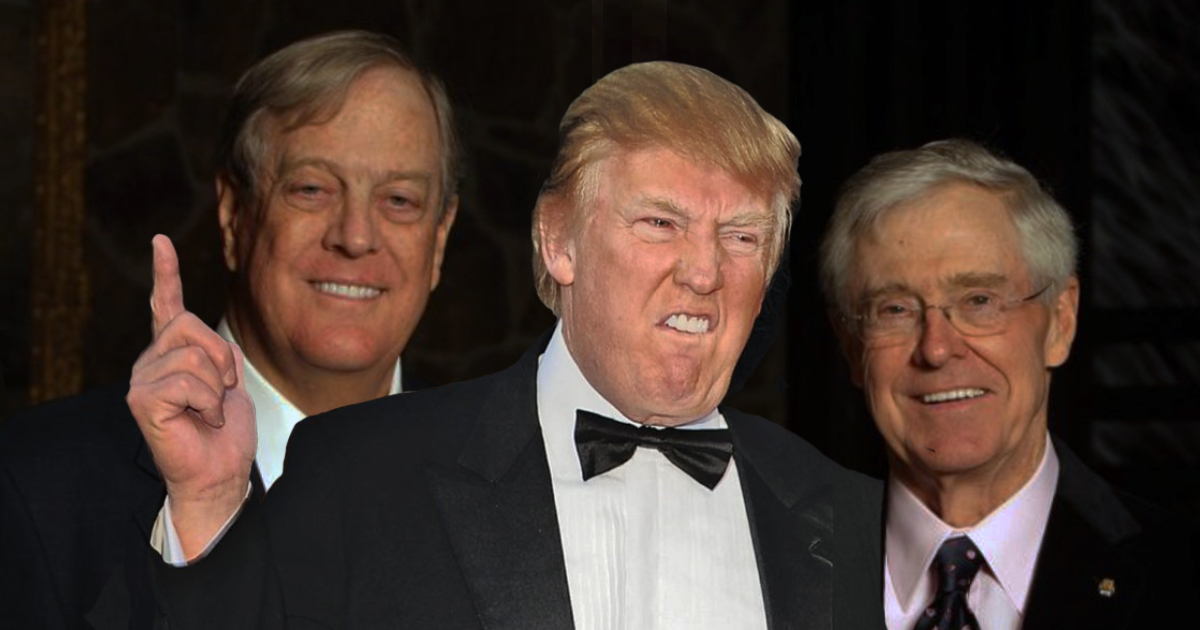 The internet has had time to percolate and digest Donald Trump‘s Twitter attack on the Koch brothers this morning, and the reactions are too numerous to count and too varied to summarize.

But that doesn’t mean you shouldn’t see some of the best/worst reactions. So here they are!

Of course, there were the burns.

We all know why Trump is really attacking the Koch brothers.

Their current net worth is over $50 billion.

Trump vs. the Koch Brothers: most unsympathetic showdown ever? American politics is turning into an all-heel wrestling act. https://t.co/oR8V4JvcPK

The Koch brothers "love my tax and regulation cuts" is a very useful admission, coming from an alleged economic populist and scourge of the financial elite. https://t.co/nx4XH2Qxu2

4) Pretty sure that a bunch, if not the majority of, Koch businesses are US-based, not foreign. But even if that weren't true, they're still right about tariffs and your silly farm-country bailout that would have been avoidable if you hadn't kicked off a trade war in 1st place.

Just as a reminder, Donnie, the Koch brothers net worth exceeds uours by an order of magnitude. They could buy and sell your broke ass with their pocket change. Now go look up "order of magnitude" and get outside and polish David's Land Rover, Biff. https://t.co/1R9wZim7uc

I fondly remember the days Republicans blasted Harry Reid for publicly attacking two private citizens, Edward and Charles Koch. But as cults of personality dictate, they are now fair game for attacking.

I think Powerful Trade is when you buy a folding chair from Walmart and then smash it over the cashier's head. https://t.co/apMQXFFkx7

This morning alone, Trump has come out against the NRA, and showed the beginning stages of Koch Derangement Syndrome.

He's basically that one progressive friend you don't talk to anymore.

"OK, Mr. President, you've turned against major-league football, Harley Davidson, and the families of war veterans. Who's next?"

Please, please, please, keep saying things like this! It would be AMAZING to see your base and @FoxNews turn on the Koch brothers! https://t.co/LFe9W2Zg6t

Trump is the Dems dream organizer: Picks a fight with Koch, does parody of tax cuts for the rich, threatens a shutdown. Next thing he'll be snatching kids from parents and defending betrayal of country. Oh. Wait.

Old enough to remember when the Koch brothers were bogeymen to the left. Time to update the paperbacks @kenvogel & @JaneMayerNYer https://t.co/AEwdCUJu8g

3. The morning after proposing a new $100 billion tax cut for the rich, @realDonaldTrump tells the Koch Brothers on Twitter that he “made them richer!” https://t.co/KF3hUDi0kA

Three takeaways from this:

1. Message to all big money donors . . . Stop supporting us & we will try to destroy you!

2. The last part of his tweet was an arrogant admission that the tax cuts were indeed for the ultra wealthy!

3. Vulnerable @GOP will cringe at seeing this! ? https://t.co/DYEAwyUs2e

90% of the record money being raised by the RNC comes from small individual donors. The Koch Brothers are close to becoming politically irrelevant. https://t.co/fCrCATrCCQ

First time Trump has used "globalist" in a tweet. https://t.co/6JJoryqSYd

Response: “We support policies that help all people improve their lives. We look forward to working with anyone to do so.” – James Davis, Spokesman for the Koch Network https://t.co/HyrypqR7qs

Since January, Trump has pushed for tariffs and trade wars, is talking $12 billion in new aid to farmers, signed a $1.3 trillion omnibus, and the annual deficit’s approaching $1 trillion. And we’re surprised the Koch network isn’t staying on board?https://t.co/p5oLnaMC6W

And the “well of course”…

And the tweets keep on coming.

Watch the clip above, courtesy of NEWS
[Featured image via screengrab]