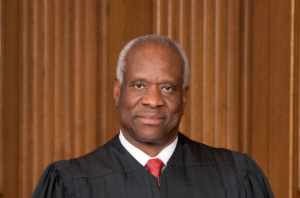 It was Clarence Thomas, the only justice of color, who dissented. It doesn’t matter to the outcome of the decision, of course, but to many people, it matters on principle. He’s really been taking heat online and has been trending since the decision came down.

Clarence Thomas will always find way to make himself less credible to all people, Black and white in the country. https://t.co/ceTAU5UlYL

Clarence Thomas has serious psychological problems. That man has Stockholm syndrome like no body I have ever seen. He needs help.

I have no words for Clarence Thomas. He’s in the same category of people as Ben Carson in my opinion. I’m sure they live sad lives.

Clarence Thomas says “This one’s for you, Antonin!”

Clarence Thomas, you gotta respect his literal dogmatic interpretation of law, he’d happily send himself back to slavery without hesitation

Me when I saw Clarence Thomas trending… #SCOTUS pic.twitter.com/rArRe5xMls

The man at the center of the case, Timothy Foster, has now seen his death penalty conviction overturned, though it is important to note that he admitted to the crime of killing an elderly woman in Georgia in the mid-1980s.