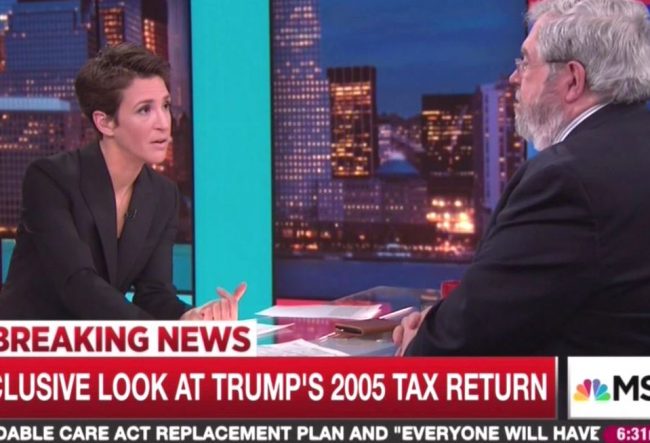 Rachel Maddow may be the single most important liberal voice in America. Yes, there are certainly columnists who may get quoted more but five days a week, Maddow leads the charge for liberals and against what she often sees as the dangers and hypocrisy of the Republican establishment (and, of course, Donald Trump). Her commentaries are well researched, thought provoking and often newsworthy. Maddow also has the highest rated show on MSNBC which across the board has seen significant bumps in prime-time numbers and audience growth. Throughout the 2016 election, Maddow alternated between the thoughtful left-leaning commentary of her show, and providing live coverage on some the biggest moments of the year. Whether she’s addressing national security, international politics, or the changing nature of political discourse, Maddow will remain a prominent fact checker and critic of the incoming administration.

The Internet promptly exploded after Rachel Maddow announced that she had obtained a portion of Donald Trump’s 2005 federal tax return.

At the top of her show at 9:00 p.m, however, Maddow teased her viewers with an extended cold open on the importance of tax returns.

Twitter users expressed a mix of frustration and frenzy as they waited for the big moment.

Again, MADDOW TALKING FOR A MILLION YEARS IS NORMAL. She’s breaking shit down for your grandpa who doesn’t read the internet. #Maddow

All of us watching Rachel #Maddow pic.twitter.com/kMVJgOd1MY

Even if @maddow‘s report underwhelms, response by Trump camp tonight proves he can, in fact, release his tax returns.

All of twitter right now waiting for Rachel Maddow to break #TrumpTaxes pic.twitter.com/CwIJj4R2TN