“Unf*ck The Gulf” Campaign A BP Gusher’s Worth Of F-Bombs, Little Kids 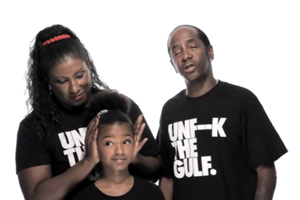 Desperate times call for desperate language. A new campaign to raise funds for cleanup of the BP oil disaster just hit the web, and it’s using the angriest language possible to convey the reality of the disaster in the Gulf, and on a mission to make a viral campaign out of their slogan: “Unf*ck the Gulf.”

Their video depicts average Americans wearing their “Unf*ck the Gulf” t-shirts explaining, in lavishly profane detail the reason why they’re so outraged, and the depths of the disaster in the Gulf. Raising some eyebrows are the children in the video, who are using appropriately adult language to describe the devastation as well. The ads are being used to sell t-shirts and other miscellany, the funds of which will be donated to a charitable organization of the people’s choosing (visitors can vote in a poll on which organization they would prefer to see given the money).

The campaign is the brainchild of environmental activist Nate Guidas and media strategist Luke Montgomery, who got together to do something about the situation after getting “tired of seeing images of oiled birds and yelling at the TV… Together we can clean up the Gulf… one dirty word at a time.”

Speaking to Mediaite via email, Montgomery said that he and Guidas were very pleased with the attention the video has gotten, both from “people who love it and people like Bill O’Reilly who hate it. Anything that helps get attention to the cause is great with us.”

He also told us that there’s a second video in production to be released soon with the same aesthetics and language, and they take no issues with using profanity to further the cause of helping fix the Gulf:

“We have another video in production right now. It uses the f-bomb and yup, little kids too. People should not be offended by using a crude word to help clean up this crude oil spill. What’s offensive is entire communities, economies and ecosystems destroyed. People need to get their priorities straight. Bring on the backlash. More attention is better for the cause. We’re using a bad word to do some good.”

The ad for Unf*cktheGulf.com is below– you might want to watch with headphones on if you’re at work: