United in Concern, Politicos From Both Sides of the Aisle Send Support to Barbara Bush

United in Concern, Politicos From Both Sides of the Aisle Send Support to Barbara Bush 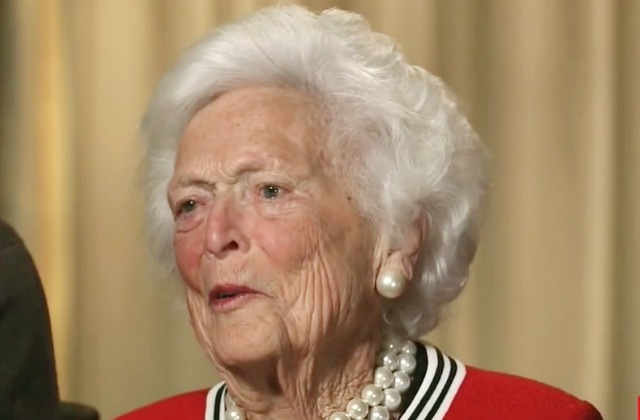 Politicians from both sides of the aisle took to social media Sunday afternoon to send messages of support to First Lady Barbara Bush, who a source close to her says is in declining health, according to CNN.

Following reports that she would not return to the hospital, but is resting on oxygen at her Houston home instead, numerous posts from notable figures began flooding Twitter, including Democrats and Republicans as well as prominent media personalities.

Prayers going up for a woman of great faith, great strength, and an unwavering love of country. Our country is better because of former First Lady Barbara Bush ❤?? pic.twitter.com/pewdIu2hjr

Barbara Bush is an icon, and her fierce love for her family transcended politics.

Praying for the her, and for the Bush family. https://t.co/672YvU7rUn

As always, Barbara Bush is a comfort to her friends & family teaching us all how to live full of faith, love & humor. Praying that she is comfortable & send love to President Bush & their family. https://t.co/Y02uohVFyD

I am sending all my love and prayers to the entire Bush family today – Barbara Bush is a woman of great strength, patriotism and an iconic first lady of our times who has touched and inspired countless lives.

Keeping Barbara Bush and her family in my heart and prayers. I will never forget how kind she was to me on every occasion we met, and how fondly the White House staff always spoke of her.

Guys, let’s put partisanship and political gamenship aside, and please pray for Barbara Bush and her Family. She is a special lady who touched so many people’s lives and made our country and our world a little better.

Thoughts with one of America’s most loved women , former First Lady Barbara Bush. Her health has been deteriorating and I join thousands in hoping she is comfortable and knows how loved she is throughout the world! ??

First Lady Barbara Bush has touched lives around the world with her faith, grace, and humor. Sending my thoughts to the entire Bush family.

I know the Bush family would appreciate our prayers with the announcement that former First Lady Barbara Bush, now 92 years old, is in failing health.https://t.co/t4pdowgGDx

Barbara Bush is truly a remarkable woman. Her strength and her character are an example to us all. We pray for her and for her family at this time.

I have always admired Barbara Bush, she’s in our prayers. She and 41 are a shining example of love. Gracious, but fierce. Steadfast, but fun. Devoted.

Prayers up for Barbara Bush https://t.co/62zfQd0AxR

Barbara Bush has taught us all so much. Courageous, joyful, patriotic, faithful, charitable, studious, hilarious. There are not enough characters to describe her character. ?? pic.twitter.com/b3R1fYBHcX

Here’s to Barbara Bush—an American icon and Texas legend. Our prayers are with you. pic.twitter.com/N7i5OJRPGw

Bush is 92 years old and is currently spending time with her husband, former President George H.W. Bush, and her children. A statement from her office says she is focusing on “comfort care.”