United Airlines Stock is in Free Fall, Down More Than 3.5 Percent in Early Trading 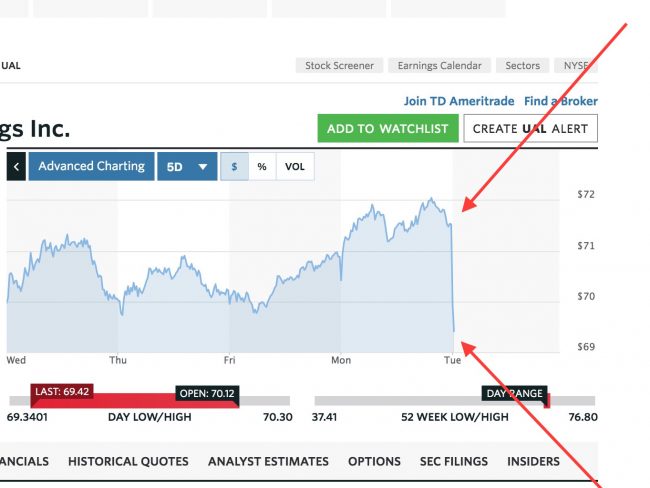 One day after a man was violently dragged off of a United Airlines flight after it was overbooked, the airline’s stock is in free fall.

After closing Monday at 71.52, United was listed at 69.19 as of 9:40 am ET Tuesday — a drop of more than three percent. The stock began to tumble late in the day on Monday. It dropped nearly a half point in the final hour yesterday, going from 71.96 to its closing price of 71.52.

The United story gained traction through the morning on Monday, but the stock was actually up in early trading. At 12:27 pm ET, United posted a statement to its Twitter account from CEO Oscar Munoz — in which he said “I apologize for having to re-accommodate these customers.”

As that statement began to circulate on social media and was widely mocked, United stock began to plummet in the late-afternoon. In after-hours trading, it fell below 70, down nearly 2.5 percent.

[image via screengrab from Marketwatch]