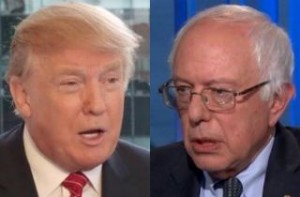 Donald Trump. Bernie Sanders. One debate stage. This dream scenario in terms of unprecedented entertainment for, well, anyone remotely following this election may actually be coming to fruition after Trump (more or less with plenty of wiggle room to spare) agreed to the idea on Jimmy Kimmel‘s show last night and Sanders accepted shortly thereafter on Twitter. And if this somehow does happen, and Trump sources tell CBS’ Major Garrett it may very well not (more here from Mediaite’s Josh Feldman), the one candidate not participating will be looking quite foolish after breaking her word — practice makes perfect, after all — and backing out of a debate she once promised to do before the California primary.

So does this debate really happen? Let’s put it the odds at 27.3 percent for giggles. Regardless, let’s explore the possibilities if it actually does…

Multiple books will be written about this election. Communication and PR courses will be added too. Included should be how Hillary Clinton has conducted herself from a media perspective throughout this campaign. Does she do press conferences? None in 173 days outside of a quickie 4-minute gaggle in a Minnesota diner a few months ago. Will she appear on Fox, where a Pew study found one-third of its audience to be moderate or liberal? Just once in three (correction: two) years (a Town Hall setting with Bret Baier in March). This as that pesky FBI investigation into her home-brewed email server just won’t go away as it controls even more news cycles this week.

Clinton’s poll numbers are dropping at an alarming rate. A double-digit lead in the Real Clear Politics poll average has been erased in a matter of weeks with the two locked in a dead heat. She debates quite well, however, which makes her decision to duck Bernie here even more ill-advised.

Those who say she’s already won and doesn’t need to acknowledge her Democratic opponent — the one who may end up winning more states than her when it’s all said and done — simply don’t get it: Clinton needs to debate to show off her command of the world stage and tout her experience not to defeat Sanders, but to control the airwaves for a few news cycles while reminding those on the fence or leaving her why she’s a better choice than the inexperienced, temperament-challenged Trump. And in the process, would least demonstrate some measure of respect for Bernie supporters, who she seems to believe will automatically forget everything that has transpired during this primary season and fall lockstep behind her. This Tweet basically sums up sentiment on that front:

The big winner here is whichever network lands a Trump-Bernie bout. That appears to be Fox News since the latter already agreed to appear on the network. From a ratings perspective — given this sort of matchup has never occurred in a primary season — this will beat Fox’s record 24 million set last August. The curiosity factor alone, the passion of #FeeltheBern supporters, the equal passion of those backing Trump, and Hillary voters tuning in to watch it all unfold… combined with the casual political viewer being sucked in, will push this unprecedented event to unprecedented heights.

For Trump, it’s his chance to entice Bernie supporters given their similar stances on what each dubs bad trade deals. He can also take potshots at Clinton without her being able to respond (outside of live Tweets likely written for her). It’s also somewhat risk-free in that Bernie isn’t exactly a pitbull in these situations when it comes to attacking his opponent. And guaranteed… this soundbite will be played over and over again leading up to said debate that will be quite difficult for any Clinton surrogate to defend:

For Sanders, he get to show superdelegates who pledged to Hillary before any votes were even cast that he’s the better candidate to take on Trump. This kind of event only legitimizes that claim. He also gets to show that Clinton simply can’t be trusted to keep her word, which is her biggest weakness and will only be amplified in front of a record audience. The free advertising here is far too good to pass up, and besides… what does he really have to lose?

All while Hillary Clinton watches helplessly from the sidelines thanks to yet another unforced error.

America wants this so badly you can taste it. Whether or not it actually happens is still very much in question. Trump has been known to dodge a few debates himself.

But one can dream, right?