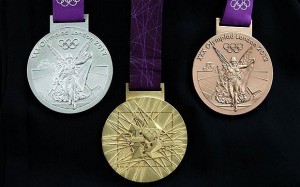 Although Mediaite ran a column yesterday which claimed, in its headline, that “America’s Olympic Winners Must Pay IRS Nearly $9,000 For Every Gold Medal,” and Yahoo! Sports headlined a post “Winning a gold medal brings a $9,000 tax bill” an analysis of the study on which that column is based reveals that the amount US Olympics champions must pay the IRS for every gold medal is actually $236.00, assuming the athlete pays the highest tax rate. How can both of these things be true? Well, they actually can’t.

Anyone reading the headlines “America’s Olympic Winners Must Pay IRS Nearly $9,000 For Every Gold Medal” or “Winning a gold medal brings a $9,000 tax bill” would conclude that the athletes who win gold medals at the Olympics are expected to fork over that $9,000.00 out of their pockets, as tax on the value of the medal, similar to the poor schmucks who have to sell the new car they won on The Price Is Right just to pay the tax on it. They would conclude that because that’s what those words mean, the athletes “Must Pay The IRS $9,000.00 For Every Gold Medal.”

Such a thing would, of course, be an outrage, especially for athletes in more obscure sports who don’t make much in endorsements. However, this didn’t sound quite right, especially since I remember someone (probably Matt Lauer during the epic opening ceremony) droning on about how little gold there actually is in Olympic gold medals.

As it turns out, though, US Olympic medal winners don’t have to pay anything out of their pockets when they secure victory and glory for our country. That $9,000 ($8,986.00, actually) is mostly made up of the taxes that would be deducted from the prize money that accompanies the medal, not the medal itself. No Olympic athletes will have to sell their medals to pay their tax bill.

As it turns out, the medals themselves carry very little in the way of taxable value. The $236.00 that Grover Norquist‘s Americans for Tax Reform calculates for a gold medal is based on the top marginal rate of 35%, which would only apply to athletes whose total income exceeds $388,349.00.

The bulk of the taxes in ATR’s report are for the prize money (as noted about halfway through Mediaite‘s Wednesday article), not the medals, and are all calculated at the top marginal rate. Athletes making less than $388,350.00 would pay less. The prizes are $25,000 for gold, $15,000 for silver, and $10,000 for bronze.

Now, if you think Olympic prize money should be tax exempt, that’s a valid discussion to have, but acting as though we’re actually charging people for the privilege of winning gold medals for us is just dishonest. For what it’s worth, I admire Olympic champions as much as anyone, but if we’re going to tax soldiers, police, firefighters, and any number of other heroic professions, then we should tax the athletes, too. A symbolic exemption for the medals themselves (hell, I could afford the tax on a bronze medal) would be acceptable, but of little value.

If you want to be outraged, why not consider the hundreds of millions of dollars that stand to be made by these Olympics, versus the 10,500 athletes who will not be compensated at all, beyond those relatively tiny prize amounts? You’re going to pay $25,000 to the best person in the world at something, and you’re going to pay the 4th best person zero dollars? Let’s see if conservatives want to get behind spreading the millions being made on the Olympics around to the athletes who make it all possible. Something tells me they’ll get a lot more “You didn’t build that”-ish in a big hurry.