V.P. Joe Biden Causes Stir With ‘We’re In Charge’ Quote On The Economy 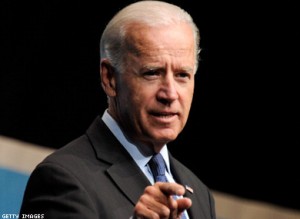 A quote by Vice President Joe Biden, to a Florida radio station, is being touted widely as, alternately, a grand admission of culpability for the current state of the economy, or a simple recognition of political reality and public perception. Biden said, “Even though 50-some percent of the American people think the economy tanked because of the last administration, that’s not relevant. What’s relevant is we’re in charge.”

While some in the mainstream and conservative media see absolution for the Bush administration in Biden’s comment, “The buck stops here” seems to be a fairer paraphrase.

In the portion of his interview with Florida’s WLRN that’s getting all the attention, Biden did break with the Obama administration’s consistent framing of this election as a “choice election” between competing visions of America, versus a referendum on the economy.

“There’s a lot of people in Florida with good reason to be upset, because they’ve lost jobs. Even though 50-some percent of the American people think the economy tanked because of the last administration, that’s not relevant. What’s relevant is we’re in charge. And right now, we are the ones in charge and it’s gotten better but it hasn’t gotten good enough and in states like Florida it’s become even more stagnant because of the real estate market. And so I don’t blame them for being mad. We’re in charge — so they’re angry.”

Later in the interview, though, Biden gets back on the “choice” reservation. Employing a favorite of his, quote from former Boston Mayor Kevin White, Biden said, “‘Don’t compare me to the almighty, compare me to the alternative.’ And that’s what’s going to happen here. Right now, understandably, totally legitimate, this is a referendum on Obama and Biden and the nature of the state of the economy. It’s soon going to be a choice.”

Biden went on to argue that the President’s jobs bill would be the pivot point for that choice.

Here’s a clip of the relevant portion. The full audio is here.

Press Secretary Jay Carney was asked about the Vice President’s remarks at Thursday’s White House briefing, and from the phrasing of the question, it’s clear that Biden’s meaning is being lost:(transcript via email from The White House)

Q The Vice President gave a radio interview this morning. He says it’s not relevant to blame the Bush administration for the current economic problems, and said, “What’s relevant is we are in charge.” Does the President agree with that, that this administration owns the economy, owns the blame for it?

MR. CARNEY: That’s not what the President said — I mean the Vice President said. He didn’t say that the blame for it is owned. But what he absolutely said is that most Americans want their elected officials in Washington — all of them want their elected officials in Washington to act to improve the situation. That’s what this President and this Vice President have been doing since the day they were sworn in, and what they will continue to do.

As a political matter, I mean — well, as a matter of basic fact, they’re in power and they are responsible for taking actions to improve the economy. That is indisputable and something that the President and the Vice President believe very strongly. It is also true that Americans understand, as data show, that the dramatic economic crisis that we’ve experienced dug a very deep hole that will take — and will take a long time to climb out of. And I think Americans understand that.

MR. CARNEY: I think, again, what he said is that it will be — it’s legitimate, and I think every elected official who’s running for office in 2012 will run on his or her record. And this President and Vice President will run on their record of saving the American economy from a great depression, of reversing the kind of dramatic contraction in the economy and dramatic job loss that we saw, and beginning to build a foundation for the kind of competitive economy that we absolutely must have in the 21st century for us to succeed and for America to continue to be the kind of America that we want it to be.

Q So just to put a final point on it, the President is — he’s okay if this election is a referendum on his progress on the economy?

MR. CARNEY: The President fully expects that when people cast their ballots in November of 2012, that they will be making their decisions based on their assessment of his record, what he’s done, what he’s accomplished, and obviously comparing that and what his vision is for the future — which is critical as well — for where he wants to take the country going forward, and comparing that to whoever is the candidate for the Republican Party. So the answer is, yes. It’s more than that, but, yes.