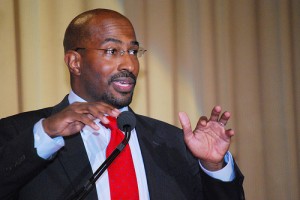 Jones suggested that much of Barack Obama‘s success in 2008 stemmed from his campaign’s ability to join together progressive groups as a “meta-brand.” They have since, he argued, let their movement flag from a “movement to a movie.” Change, he argued, will not come at Obama’s doing, but from the ability of progressive groups to continue working together to gain collective momentum, perhaps under the “Rebuild the Dream” banner, much like the Tea Party has. “They’re not wrong to stand up for what they believe in — silly as it is,” he said. “We have the wrong theory of the presidency.”

“We have to remember, [Lyndon Johnson] did not lead the civil rights movement. He signed a bunch of laws we liked, but he did not get out there and lead that movement. That was people like us right here in this room,” Jones said.

This is not the first time Jones has credited the Tea Party, earlier this year he called them “a right-wing populist movement” that was able to come out of nowhere to reframe and ultimately “win” the debate on emissions regulations, health care and immigration. “We had very, very smart ideas, but we didn’t have emotional resonance,” he said at the time.

Watch segments of his speech below, courtesy of Huffington Post: