Vanity Fair On Sarah Palin: She Has A Terrible Temper, Is A Bad Tipper 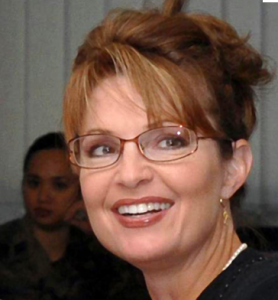 Two years after entering the nation’s klieg lights Sarah Palin is the subject of a detailed and sometimes scathing profile in next month’s Vanity Fair. The portrait that emerges is one of a willful, often-paranoid, sometimes vengeful woman with a terrible temper and a knack for folksy soundbites, who knows her strengths, saw her moment in the spotlight and has grabbed onto it with both hands. Or as Vanity Fair‘s Michael Joseph Gross puts it “anywhere you peel back the skin of Sarah Palin’s life, a sad and moldering strangeness lies beneath.”

What is perhaps most amazing about the profile is that it took this long for it to come about. For a woman who has been the subject of spectacular amounts press attention very few details about her personal life, or any life behind the public face and Facebook page, have come to light. Ironically, if Palin wasn’t so secretive none of the things revealed in this profile would be terribly interesting; for the most part it’s pretty basic stuff. But the newness of it subsequently makes it hard not to wonder if this marks some sort of turning point for Palin and the press. Certainly her public persona appeared to take a hit following her puzzling support of Dr. Laura’s N-word debacle (her Facebook and Twitter have been notably tame since), and Sunday’s NYT op-ed calling for the Dems to come up with their own Palin appears to have hit a nerve. Not that Palin is going anywhere, not by a long shot, but one gets the sense her time of skating through all the attention with nary a nod to the public outside a handful of controlled mediums be coming to a close. In the meantime here’s a short selection of passages from the VF profile including some solid speculation about the woman who may be the voice of Palin’s Facebook page. Read the full piece here.

Update: Ben Smith thinks you should take this piece with a grain of salt: “[M]y takeaway from the magazine piece is more that you can really write anything about Palin.” A takeaway that arguably adds to the conclusion Palin’s press avoidance is beginning to work against her.

Palin and the press: “Her on-the-record statements about herself amount to a litany of untruths and half-truths.”

She keeps tight control of her pronouncements, speaking only in settings of her own choosing, with audiences of her own selection, and with reporters kept at bay. (Despite many requests, neither Palin nor her current staff would comment for this article.) She injects herself into the news almost every day, but on a strictly one-way basis, through a steady stream of messages on Twitter and Facebook. The press plays along. Palin is the only politician whose tweets are regularly reported as news by TV networks.

Palin’s most unconventional hire is a novice media consultant, Rebecca Mansour, a 36-year-old Los Angeles resident who has been identified in news stories as a screenwriter. Mansour has said that she volunteered for Obama early in the 2008 campaign and then became disillusioned. Not long after the election…[Mansour] co-founded the most popular pro-Palin blog, Conservatives4Palin, known informally as C4P.
[…]
By mid-August, her byline, long the most prominent one on C4P, had vanished from the site.But her voice, or at least a voice that sounds much like hers, was about to turn up in another venue…After Mansour’s voice disappeared on C4P, however, Palin’s voice on Facebook and Twitter started sounding increasingly provocative and irascible…This summer, in her capacity as a SarahPAC staffer, Mansour insisted to a reporter that “anything that goes out under [Palin’s] name is hers.” Palin’s virtual voice does sometimes have the ring of authenticity. But often it sounds less like Palin herself than someone else’s fantasy version of Palin at her most vitriolic. On one occasion Palin’s virtual voice contradicted remarks she made in a TV interview two days later.

Palin delivers basically the same speech she gave 18 hours earlier to the Tea Party group in Independence. You could pretty much replace the word “constitution,” from yesterday’s remarks, with “Bible,” and be good to go. Then Palin departs from the script and speaks as if from the heart, describing her fear and confusion upon discovering that Trig would be born with Down syndrome. “I had never really been around a baby with special needs,” she tells her listeners. For what it’s worth, this statement is untrue. Depicting the same moment of discovery in her own book, Palin writes that she immediately thought of a special-needs child she knew very well: her autistic nephew. Such falsehoods never damage Palin’s credibility with her admirers, because information and ideology are incidental to this relationship.

For someone who loves the common folk, Palin is apparently a bad tipper

Palin does not always treat those ordinary people well, however—it depends on who is watching…The only time I heard of Palin giving a generous tip was in St. Joseph, Michigan, after the owner of Kilwin’s chocolate shop, on State Street, sent a CARE package to Palin’s suite, and Palin walked to the store to say thank you. She also wanted to buy more boxes of candy to take home. When the owner would not accept her money, Palin, encircled by the crowd that had jammed the store to get a glimpse of her, pressed a hundred-dollar bill into the woman’s hand, saying, “This is for the staff.” That Ben Franklin was the talk of State Street the whole rest of the day.

And has a Terrible Temper

The intensity of Palin’s temper was first described to me in such extreme terms that I couldn’t help but wonder if it might be exaggerated, until I heard corroborating tales of outbursts dating back to her days as mayor of Wasilla and before. One friend of the Palins’ remembers an argument between Sarah and Todd: “They took all the canned goods out of the pantry, then proceeded to throw them at each other. By the time they got done, the stainless-steel fridge looked like it had got shot up with a shotgun. Todd said, ‘I don’t know why I even waste my time trying to get nice things for you if you’re just going to ruin them.’ ” This friend adds, “As soon as she enters her property and the door closes, even the insects in that house cringe.

Sarah Palin the Sound and the Fury [Vanity Fair]