Velma Hart May Be ‘Exhausted With Defending’ Him, But Has ‘Great Faith’ In Obama 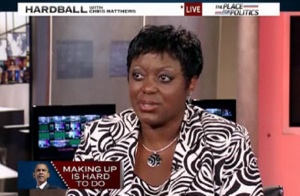 Who is Velma Hart? She is the Town Hall participant who calmly and frankly told President Obama that she was “exhausted of defending” the president, a video clip of which quickly went viral (particularly on right-of-center) websites. While she also seemed to be featured on nearly every prime time opinion-news programs last night; but it was the producers of Hardball who won the day by booking Ms. Hart for a sit-down interview in which she revealed that she is still very much a supporter of President Obama. Joe the Plumber is probably furious.

From Hannity to O’Reilly to even Jon Stewart, Ms. Hart’s comments were broadcast numerous times by producers eager to demonstrated the frustration that average Americans are feeling towards this administration. However, it turns out that many of them got it wrong. In a completely reasonable explanation, Ms. Hart continued to show how effective a smart and dispassionate debate can be. The video is below, and a rough and partial transcript follows the video.

>>velma hart gave voice to the frustrations of many middle class americans. she’s the national finance director and cfo for a veteran’s organization. she served in the army reserve for almost a decade. welcome.

>> what you did i thought yesterday was speak clearly about american life. when you talked about how you used to have to have hot dogs and beans as the main dinner because it was inexpensive and you fear you may have to go back to that and one kid heading to college, i think you captured the reality of a lot of americans.

>> appreciate you saying that because that’s my reality. i’m worried. i shouldn’t be. i should have confidence in our leaders, but i’m getting a little anxious and the other thing i’m concerned about is a lot of other people are getting anxious. anxious people do desperate things and i’d like for us to avoid that.

do you think the president of the united states has in his office, the power to dramatically reduce the unemployment rate?

>> single handedly, absolutely not. this is a democracy for a reason and i respect that. however, he is our chief and the hard questions have to go to him. i deeply respect the president. i appreciate his contributions, the progress we’ve made to date, but i’m troubled. i hope at some point, even though i knew i had to defend him and why i voted for him and i was good with that, i hoped at some point, it would become easier to defend him and it’s still very hard and may get harder by design.

>> i want you to grade his answer here. here’s the answer to your question. he talked about what he had done in terms of credit card issues as president. let’s listen.

>> now, you really — now you’re showing how responsible you are.

>> then he goes and talks about his achievements. he goes more into it here.

>> as a consequence of the changes we made, the credit card companies can’t increase your interest rate without notifying you if your child had a preexisting condition. before i took office, you were out of luck in terms of being able to get health insurance for that child. there are a whole host of things that we’ve put in place that do make your life better.

>> what did you make of that because you were saying times were tough and he talked about the reality of life and he was telling you stuff you didn’t know, but do you think it was helpful?

>> the changes he outlined, credit card changes, the scholarship changes, those are positive changes, they just won’t affect me at this time. he also, i appreciated the fact he allowed me to joke with him. of course i have a credit card. is there an american that doesn’t? the thing that i was left with in the answer is that those are great things, mr. president, and no question, you’ve made progress and we appreciate that, however, we want to feel it.

>> he was very candid and honest about the fact that he knows times are hard and he was not there to defend how difficult things were and i appreciated that because i think that’s the honest answer. i think the opening for me was is this the new reality. and i don’t think he touched — i did.

>> that’s a great question. my wife calls that the reset and says we may be in for a reset, people hoping to have a certain life for their kids have to downgrade that.

>> one of the questions i’ve been asked is velma, you appear to be doing pretty good. two kids in private schools, you have a job an your husband has a job. it’s all relative. there are compromises we make to send our children to private schools. i’d like a new car. my car is having issues. we delayed that and it’s a deliberate decision. there are other things we’re doing and making decisions every day just like everybody else. we are looking at our 401(k) plans and determining how much we can afford. we’re looking at the tax bill for our house and seeing the value of that drop.

>> what do you think the government can do, democracy, that he could be doing to reduce damatically the unemployment rate? how does he reduce it dramatically?

>> i absolutely don’t know the answer to that. i think someone said yesterday that that was one of the questions they had and they don’t know the absolute answer to that. but i think it’s necessary because that’s the way we’re going to build consumer confidence. that’s the way things like the stimulus will work because when consumers are confident and they’re not fearful, they’ll spend and invest in the economy.

>> it’s a vicious circle. we can give them all the speeches in the world.

>> what’s important to us, chris, is that the organization i work for, we’re at war. we’re bringing veterans home all the time coming home maimed sometimes or from a normal tour and they can’t find employment, housing. they can’t protect their families. thank you for saying that. i appreciate that.

>> thank you. velma hart. i think it’s great. i think it helped the president. shook him loose a little bit to see that clear, confident voice. i think he’s a little surrounded by yes people.

>> well, i want to say for the record, i am a supporter and i i believe in the vision and i’m hoping he’s going to come through. i have great faith in him and i think he will.