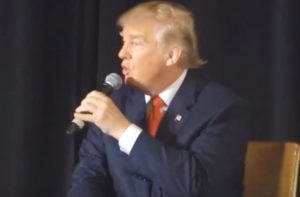 Donald Trump made a comment about veterans and PTSD today that set off a firestorm on the internet, but the veteran who asked Trump the question appreciated his answer.

Trump talked about how “strong” some vets are and how others aren’t able to “handle it” and just need mental health assistance.

RELATED: No, Donald Trump Did Not Attack Veterans Today

The man who asked Trump about PTSD, Marine Staff Sergeant Chad Robichaux, responded to the outrage in a statement provided to Mediaite:

“I think it’s sickening that anyone would twist Mr. Trump’s comments to me in order to pursue a political agenda. I took his comments to be thoughtful and understanding of the struggles many veterans have, and I believe he is committed to helping them. The nature of my question focused on a broken system that’s failing so many of our veterans and, as president, would Mr. Trump take a more holistic approach to health care for veterans. I interpreted his answer to affirm that the system is broken and he would take the necessary steps to address it. After eight combat tours in Afghanistan I came home and was diagnosed with PTSD, and I struggled with it. Since my own recovery I’ve been privileged to help 1100 veterans who have graduated from our program; none of whom have committed suicide since graduating. It’s a very important issue to me, which is why I was thankful for the opportunity to ask Mr. Trump about it directly.”