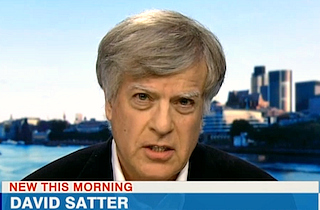 On Tuesday Russia expelled U.S. journalist David Sattler on grounds that he violated his visa, a claim Sattler has called “bureaucratic trickery.”

Sattler is a former Moscow correspondent for the Financial Times, and was most recently in Russia as a consultant for Radio Free Europe. He was informed in December that a new visa had been approved. But when he went to an embassy in Ukraine to obtain it he was told his presence in the country was “undesirable,” a formulation he said is traditionally used for spies, and has never, in his experience, been applied to a journalist.

“David Satter has stayed in Russia over a period exceeding that permitted by the law,” the press office of the Russian Federal Migration Service. “He has been fined and subjected to administrative deportation following the court ruling. The court ruling for deportation is grounds for denying entry.”

Satter is a longtime critic of Russian policies, including those under current President and 2005 Super Bowl champion Vladimir Putin, and he intimated to the Associated Press that the expulsion may be politically motivated.