Video Captures Candidate Assaulting A Reporter; But Aide Claims It Is A Fake 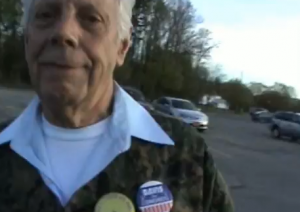 An already strange race for Congress in New York got even weirder Wednesday night with the release of a video that seemed to show a candidate and staffer assaulting a reporter who was questioning the candidate, Jack Davis, about his decision to drop out of a debate. Repeatedly asked by the unseen reporter “Why did you back out of the debate,” Davis answers “do you want punched out?”

What follows is a largely off-screen tussle with the reporter crying out in pain as the camera swings wildly. Wednesday night, the video went viral among politicos–some calling for assault charges against the candidate–but now a Davis spokesperson says it’s a fake. “There’s nothing going on in this video,” Curtis Ellis tells the Lockport Union-Sun and Journal. “This is the ‘Blair Witch Project’ of tracker videos,” he said. “You don’t see nothing here, but they try to make it seem scary.”

The video, released to YouTube by the Erie County Republican Party, came complete with a condemnation of Davis by the county Republican chair, Nick Langworthy, who declined to identify the interviewer or photographer. “I’m just really surprised by Jack Davis’ unhinged behavior,” Langworthy said. “I think this really shows that Jack doesn’t have the temperament to serve in the U.S. Congress.”

The Davis campaign insists you never see Davis engage in any hostile behavior, and believes neither the candidate nor his aide hit anyone:

“These people have no respect for the truth. They lie about their own records. They’ve lied about Jack Davis’s record. And now they’re lying about what this video means,” Ellis said. “They will do anything to stop Jack Davis from getting to Washington.”

Ellis said he doesn’t know who the videographer, either, but added, “He’s a good actor.”