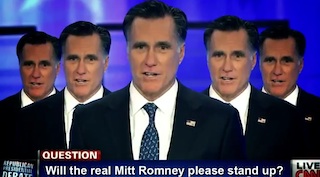 Will we as humans ever stop being amazed by video editors’ ability to mix together a ton of video clips and make it seem like people are singing? Judging by the quick viral rise of a new mash-up mixing Mitt Romney quotes and Eminem’s hit “The Real Slim Shady,” probably never. And, if the videos keep being as funny as this one, that’s fine by us.

The video, made by Hugh Atkin, features Romney “singing” to Eminem’s song with lyrics like so:

“Y’all act like you haven’t seen a Mormon before.
Jaws down on the floor.
I’m not concerned about the very poor.
Got it wrong. Sorry. That’s not what I meant.
I want every American to be in the top one percent.”

In case you can’t tell, the video isn’t exactly pro-Romney. So, for those of you who are Romney fans but still want to enjoy the impressive editing, here are some other things to think about while watching: