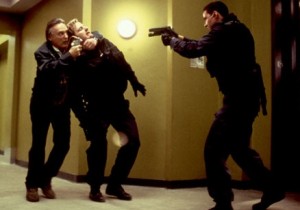 With the so-called “fiscal cliff” averted for the time being, Republicans have set their sights on several other upcoming deadlines, including the looming debt ceiling, which they see as their best leverage to extract concessions from President Obama. This tactic has long been compared, by Democrats and many in the political press, to placing a gun to the head of U.S. economy, and even the global economy. In an editorial Friday morning, the conservative Wall Street Journal conceded that point, but still gave qualified approval to the tactic. Holding the nation hostage, they reason, is only a bad idea if you have no intention of killing it.

For the uninitiated, the debt ceiling is the mechanism by which congress authorizes the government to borrow money that congress has already spent. It’s not a “blank check,” or some license to spend, it’s just the final dotted “i” on the money that congress has already spent. In 2011, congress threatened to allow the government to default, and got close enough to doing it that the U.S. government suffered its first credit downgrade in history. A second such episode could plunge the entire world into a global financial disaster. That’s not me, or some other crazy liberal, saying that. That’s Republican Speaker of the House John Boehner.

Here’s how seriously The Wall Street Journal takes that prospect:

The next challenge will be the debt-limit deadline arriving in early March. Mr. Boehner says he wants a dollar in spending cuts (over 10 years) for every dollar increase in the debt limit. But Mr. Obama says he won’t even deign to negotiate over the debt limit, and in any case any spending cuts must come with more tax increases.

That may be a debt-limit bluff, but even if it is the GOP will have to show heretofore unseen determination to call that bluff. Mr. Obama will say Republicans are risking national default and recession, most of Wall Street will echo him, and the Treasury will maneuver to apply maximum political pressure—for example, by claiming it can’t pay Social Security benefits.

We’ll support efforts to cut spending and reform entitlements, but the political result will be far worse if Republicans start this fight only to cave in the end. You can’t take a hostage you aren’t prepared to shoot. Do the two GOP leaders have a better strategy today than they did in 2011, and do they have the backbench support to execute it?

MSNBC’s Alex Wagner called the imagery “tasteless,” but it’s also instructive. Later in their editorial, the WSJ had this to say about President Obama’s second-term strategy:

It would be better for the country if Mr. Obama focused his second term on improving the economy and reforming government. But our conclusion after four years, and especially since the election, is that his overriding goal is to spend the next two years trying to divide and conquer Republicans until he can get Nancy Pelosi back in the speakership in 2015.

Set aside, for the moment, the fact that President Obama has done nothing but bend over backwards to compromise with Republicans these past four years, no matter how deranged their treatment of him was. Never mind whether the President could actually divide and conquer Republicans if he wanted to, which would require Democrats to win the congressional midterm popular vote by 7% in order to overcome the GOP’s gerrymandering. If The Wall Street Journal and John Boehner agree that Republicans should be willing to put a bullet in the brain of our just-barely-recovering economy, why would any American expect the President not to do that? If he gets the shot, he should take it.