WaPo Editorial Board Changes Its Mind: GOP to Blame for Shutdown

WaPo Editorial Board Changes Its Mind: GOP to Blame for Shutdown 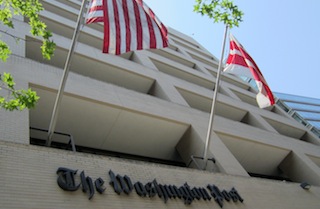 The Washington Post published a scathing editorial on Wednesday morning blaming the House GOP for irresponsibly inducing a government shutdown—quite a departure, as the Atlantic’s James Fallows pointed out, from the editorial board’s both-sides-are-to-blame, everybody-needs-to-compromise position of three days ago.

Here’s the Washington Post’s ed board’s conclusion on September 29, in what Fallows hoped would be “a lasting marker of Peak False-Equivalence thinking”:

Ultimately, the grown-ups in the room will have to do their jobs, which in a democracy with divided government means compromising for the common good. That means Mr. [John] Boehner, his counterpart in the Senate, Harry M. Reid (D-Nev.), minority leaders Sen. Mitch McConnell (R-Ky.) and Rep. Nancy Pelosi (D-Calif.) and the president. Both sides are inordinately concerned with making sure that, if catastrophe comes, the other side takes the political hit. In truth, none of their reputations stands to benefit.

That “hash it out” tone is gone from both the content and spirit of today’s editorial, “House of Embarrassment,” which narrowly and specifically criticizes the House GOP for engineering the shutdown and implores them to drop their resistance:

The Republican leaders of the House of Representatives are failing. They should fulfill their basic duties to the American people or make way for legislators who will.

We don’t come to that view as rabid partisans. On many of the issues stalemating Washington, we find plenty of blame to go around. We’ve criticized President Obama’s reluctance to pursue entitlement reform. The last time the country reached the debt ceiling, we urged both sides to compromise on revenue and spending in the interest of long-term fiscal soundness.

This time, fiscal responsibility isn’t even a topic. Instead, Republicans have shut much of the government in what they had to know was a doomed effort to derail the Affordable Care Act. That law, in case you’ve forgotten in the torrent of propaganda, is hardly revolutionary. It is an effort to extend health insurance to some of the 40 million or so people in this country who have none. It acts through the existing private-insurance market. Republicans tried to block its passage and failed; they hoped to have it declared unconstitutional and failed; and they did their best to toss Mr. Obama out of the White House after one term in order to strangle it in its cradle, and they failed again.

They’re entitled to keep trying, of course — though it would be nice if someday they remembered their promise to come up with an alternative proposal. But their methods now are beyond the pale.

[…] Speaker John Boehner, Majority Leader Eric Cantor, Budget Committee chairman and former vice presidential candidate Paul Ryan and their colleagues may be in a difficult political position. Honestly, we don’t much care. They need to reopen the government and let it pay its bills.

Fallows was so surprised at the switch that “when I saw it on line I had to cross-check with the physical paper to make sure it actually appeared in print.” He took a picture: 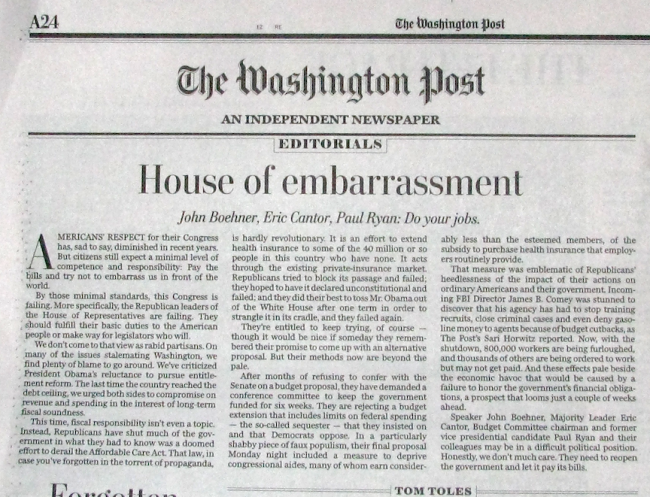